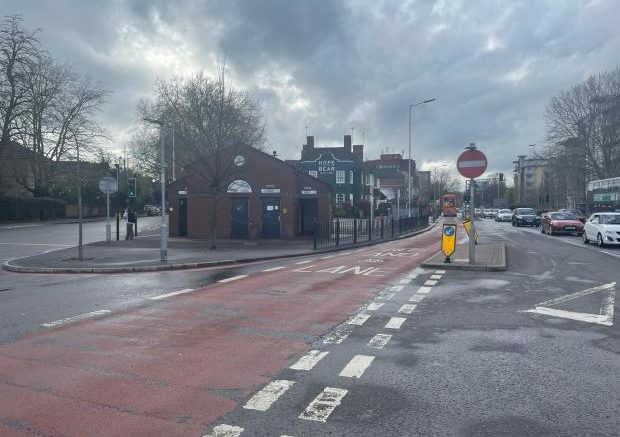 Taxi drivers in Reading are petitioning to be able to use a traffic lane currently reserved for buses and cyclists.

Along King’s Road, there are two bus lanes, one going east and one going west towards the town centre.

Currently, private taxis are allowed to use the westbound bus lane as well, but have to join regular traffic when going eastbound towards the A329, the M4, Heathrow Airport and other destinations.

A private hire taxi driver has complained that they often made ‘very late’ by the worsening traffic conditions in Reading.

Recently, a petition signed by 187 people has been submitted calling for Reading Borough Council to allow private hire taxis to use the eastbound bus lane.

It also calls for the council to allow private taxis to use the Duke Street ‘bus gate’ to access London Street.

The petition was delivered by Kamran Saddiq, who introduced it at a recent council meeting.

Mr Saddiq said: “I myself and likewise most of the private hire drivers in Reading have been driving Private Hire for many years.

“Over the years the traffic situation in Reading has got from bad to worse.

“Day by day it is making our job very difficult and very challenging.

“Especially in the peak times the roads are so busy that we often get very, very late in dropping our passengers to their designated destinations.

“On several occasions we have clients who need to get to the airport in the mornings, we are always stuck in traffic.

“If we were granted access to use this bus lane it would help us in a logistical way, as you have been very kind to grant us the inbound usage of the King’s Road bus lane a few years back, in which there have been barely any complaints of abusive use.

“It was given to us on a trial period, we all stuck to the rules.”

He added that easing the flow of traffic would contribute to the council’s strategic aim of reducing pollution, and that the intention is not to slow buses down.

Mr Saddiq said: “The main reason of use is for the buses, we do not want to be stopping them escorting their passengers as well.”

The petition was officially received at the traffic management sub committee meeting on Wednesday, September 14.

Committee vice-chair councillor Matt Yeo (Labour, Caversham) explained that the petition has been received and considered by council officers for a report to the committee at a later date.

Currently, buses, cyclists, motorbikers and black cab drivers are allowed to use the eastbound bus lane according to road signs.