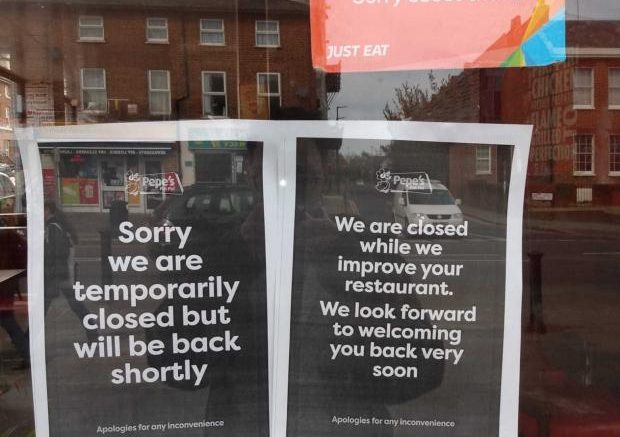 A Reading chicken takeaway that has temporarily closed is in deep trouble with the council over breaking planning rules.

Pepe’s Piri Piri at the junction of Oxford Road and Zinzan Street closed on a temporary basis on Friday, April 8 so refurbishment works can be done.

However, Pepe’s is in trouble with Reading Borough Council as its current shopfront and extraction equipment was put up without planning consent.

A spokeswoman for the firm said the current works being undertaken are an attempt to comply with planning rules, and the company has done what it can to resolve the issue.

However, councillor Tony Page, a representative of the area, called the spokeswoman’s comments “guff” and said Pepe’s was “telling porkies”.

The store was converted from a Ladbrokes into Pepe’s Piri Piri in October 2019, with approval for the conversion being granted in May 2018.

Yet the council has slapped Pepe’s with a planning enforcement notice because the works that had taken place on the shop did not match those contained within the approved plans.

The notice demands that  the store stop being used as a takeaway, the shopfront be removed, and the extraction fans be removed.

If the franchisee does not obey the enforcement notice, it could be liable to an unlimited fine.

Cllr Page (Labour, Abbey) has argued that Pepe’s has had 18 months to try and resolve the issues.

He said: “We’ve had a number of meetings with them.

“They promised new equipment and that they would not constitute a nuisance, but it has been.

“I don’t believe a word they’ve said. The council is pressing for enforcement as a matter of urgency and high priority.

“They went ahead with frontage and advertising, none of which complies with their planning approval.

“That’s why we are pressing for the enforcement action to take place as soon as possible, and the council’s legal team is working on that.”

The planning enforcement notice can be appealed.

The notice was served in January 2020, however enforcement was delayed as Pepe’s franchisee had submitted a retrospective application to confirm the works it had done that same month (application 200142).

This plan was due to be decided on at a planning committee meeting on Wednesday, March 30, but it was withdrawn.

Details of the enforcement notice were laid out in council planning officer Ethne Humphrey’s report to the committee.

For its part, a spokeswoman for Pepe’s stated that the company has done everything the council has asked it to do “by the books.”

The restaurant and takeaway will be closed for two weeks while work is undertaken on the front and the canopy of the store.

The spokeswoman added that Pepe’s have had to submit a new application detailing a new fan and ventilation system that is seeking to use, and it is now waiting for that application be validated by the council.

The previous application (200142) was withdrawn because changes were made to the plan.