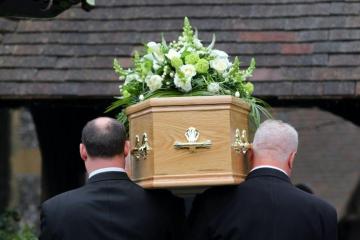 DEATHS in Reading remained far higher than normal levels in May following a spike the previous month, official figures show.

But as mortality rates across the country begin to return to pre-pandemic levels, a leading behavioural scientist has warned an imminent reduction in the two-metre social distancing rule is a “disaster waiting to happen”.

Office for National Statistics figures show 121 deaths were recorded in Reading during May.

This was far higher than the average rise across the South East’s 67 local authorities, where death counts increased by 16 per cent.

Reading also saw a jump in fatalities in the previous month, with 127 more deaths recorded compared to April 2019 – an increase of 123 per cent.

It means that in the year to the end of May there were 181 (37 per cent) more deaths than at the same point last year.

Ministers and health experts leading the public response to the coronavirus crisis have consistently said excess mortality figures will be the most accurate measure of the overall impact.

This is because they capture deaths that may have been indirectly caused by the pandemic, such as by people not seeking or receiving medical attention for other conditions.

The figures also allow better international comparisons, because they are not affected by differences between the way countries count coronavirus-related deaths.

The ONS announced at the end of June that the number of deaths registered in England and Wales over the week ending June 19 had fallen below normal levels for the first time since before lockdown was imposed.

It came after Boris Johnson revealed plans to scrap the two-metre social distancing rule in favour of a one-metre plus system, to allow pubs, restaurants and hairdressers to reopen on July 4, on what has been dubbed “independence day”.

Prof Michie, a member of the Independent Sage expert group set up to shadow the official government advisory group, said the change is a “disaster waiting to happen”, insisting opening indoor areas in pubs is “probably the top of the level of the hierarchy of riskiness”.

She said: “If you look around at people trying to keep two metres apart, most are actually more like one-and-a-half metres, which is significantly safer than one metre.

“If you go down to one metre, actually that is about the distance that people you don’t know and are not intimate with are distant from each other just generally going around and about their business. So basically you have lost the whole concept of social distance.

“And once you have lost the whole concept of social distance, you really are in trouble.”