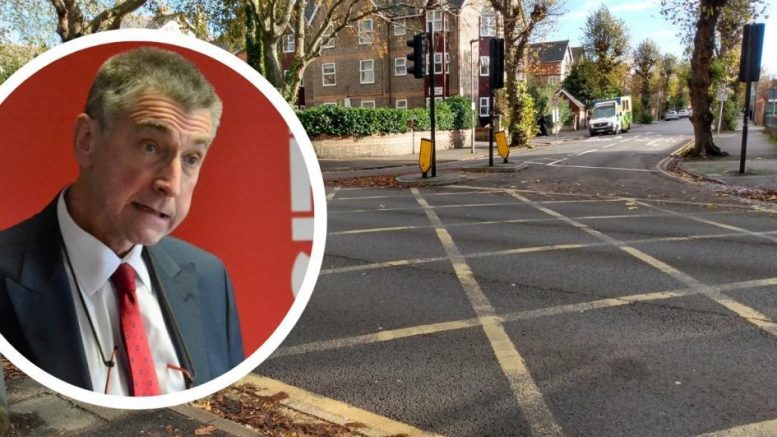 A top councillor has responded at length to the AA’s objection to Reading council’s move to fine drivers who stop in yellow box junctions.

The council is due to approval a proposal which introduce fines for drivers who stop at 15 yellow box junctions across Reading.

You can read its objection in full here.

The objection has prompted a response from Tony Page, lead councillor for climate strategy and transport.

Cllr Page (Labour, Abbey) said: “The blocking of yellow box junctions endangers road users and causes queues, which are a major contributor to poor air quality in parts of Reading.

“Whilst this would be a new restriction in Reading, the Council team is fully trained on enforcement, including learning from other local authorities where yellow box restrictions have been in place for very many years.

“We would add that the presence of cameras at a junction should not alter behaviours as we would expect drivers to adhere to the existing Highway Code at yellow box junctions, with the safety of other road users always of paramount importance.

“Before any PCN can be issued, CCTV footage from across the junction is carefully reviewed by officers who are trained to ensure all extenuating circumstances at the junction are taken into account before a decision is made.

“As with any bus lane or parking fine, anyone receiving a PCN can of course appeal if they believe their exit was clear when they first entered the junction, or if they believe it is unfair in some other way. Once a review of footage has taken place, they can escalate it to the independent Traffic Penalty Tribunal if they still disagree with the finding.

“The Council reviews all Reading cases heard at the independent tribunal to identify any learning points, and will continue to do so. It also intends to closely monitor all PCN’s issued at these 15 new locations to refine and improve the operation, if that is required. Officers have already reviewed the London Tribunals website on appeals as part of their preparations.

“The level of PCN is set by Government and not something the council has any direct control over.

“We would also emphasise that the council already openly publishes all information on PCN’s as part of its Annual Report.

“Data on yellow box junctions would form part of that report.”

READ MORE: How much Reading council raised in parking fines during the pandemic

Cllr Page added that, in acknowledgement of the change, the council will issue warnings rather than fines for the first six months.

He also stressed that any funds raised from fines has to be re-invested in transport or highways improvements across Reading.