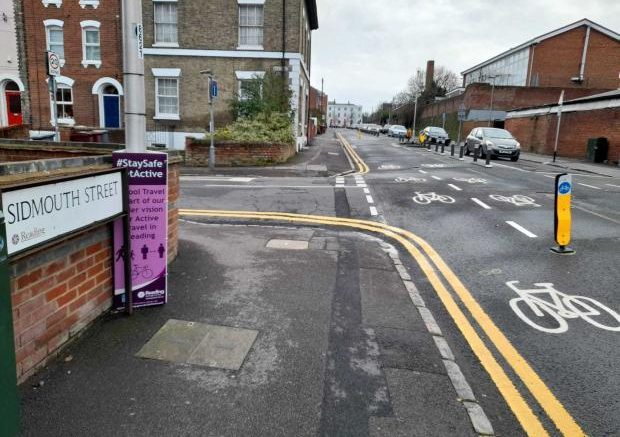 The decision to make a segregated cycle lane permanent in Reading has been taken despite hundreds of objections.

In the summer of 2020, the southbound lane of Sidmouth Street in Reading was closed and turned into a two way cycle lane.

The move was taken without consultation, as councils were given Government funding to quickly create ‘active travel measures’ to improve fitness and social distancing during the pandemic.

However these measures only had approval for a temporary period.

Recently, a consultation did take place on whether to make the cycle lane permanent, or reinstate the  southbound lane for motorists.

Despite 648 people objecting to the proposal, the scheme was made permanent this week.

Of those objections, 266 came from petitions, with the majority, 382, being written in.

According the consultation responses, the scheme proved unpopular with both drivers and cyclists.

One cyclist said: “This scheme appears to be ill conceived and badly thought out, and results in great inconvenience for large numbers of residents and motorists.

“I am a regular cyclist in the area and have never once used these lanes or felt that they are useful.”

Respondents pointed out that cyclists already use Waltington Street.

Another resident said: “As a cyclist travelling to and from London Road and Reading town centre, I would want to cross at the existing cycle crossing at The Lyndhurst and travel along Watlington Street safely.

“This leads directly onto the hospital and university in one direction and the town centre, train station and Caversham in the other.

“It makes no sense to travel along Queens Road and London Road to Sidmouth Street in order to come back again on the parallel street.

“Sidmouth Street itself is regularly backed up with traffic impacting London Road.”

They added the street should be made into a two lane northbound route, rather than “funnelling cycle traffic alongside a line of idling traffic pumping out fumes.”

The Sidmouth Street cycle lane soon after it was established in 2020. Credit: LDRS

Meanwhile, drivers complained about the inconvenience of losing the southbound lane for good.

A driver said: “Residents of Kendrick, Morgan and Allcroft Roads have been deprived of the most efficient route home from Reading town centre.

“For two years, it has been necessary instead to traverse instead the length of London Street, up Whitley Street and onto Christchurch Road before turning into Kendrick Road.

“Cyclists already have the option of using Watlington Street, so the unneccesary alterations to Sidmouth Street was just pure folly.”

Less than 100 people wrote in support of the scheme, with the council receiving 89 positive responses.

“It needs to be done to prevent gridlock and support the development of key sites in a sustainable way.”

Another supporter said: “We need to accelerate the building of a segregated cycle network in Reading.

“Removing this lane would be a step back.

“The council also needs to be clearer about how it will fit into the future network – this scheme provides the perfect excuse for anti-cycling activists because no one uses it.

“No one uses it because it is a cycle lane, not a cycle route, so please be clearer about how it will link up.”

The scheme was made permanent by the council’s traffic management sub committee on Wednesday, September 14.