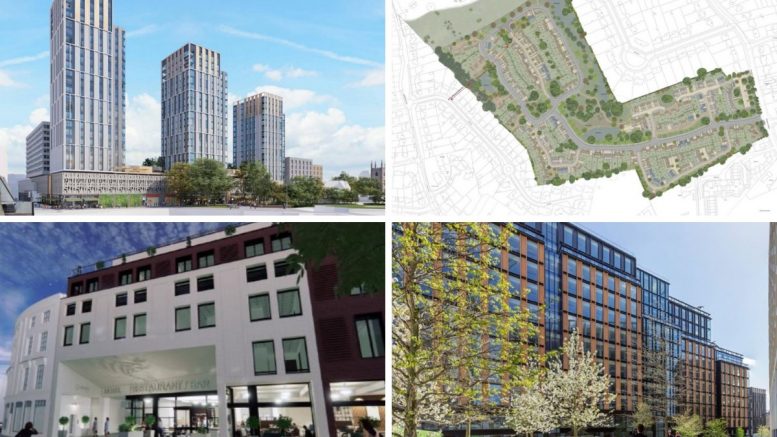 Some huge developments that will completely change the face of Reading will be coming in the next year.

The biggest development will be the construction of four massive towers on top of the Broad Street Mall in the town centre.

Nearby, the transformation of the Bristol & West Arcade into a hotel can also begin after plans were approved in July.

Meanwhile, a fresh plan to build 223 homes at the old Reading Golf Club site and a massive scheme for 620 homes near the town centre are both likely to  be decided on in 2022.

You can view plans by typing in there reference in brackets in the council’s planning website here: http://planning.reading.gov.uk/fastweb_PL/welcome.asp

A scheme to build four towers at the Broad Street Mall is finally underway after clearing one final planning hurdle.

Work can finally start on the development as a section 106 agreement was confirmed on December 6.

The scheme itself was approved back in March 2020, subject to the s106 agreement being completed.

These agreements are monetary contributions that developers are ordered to pay to the council to pay for council services such as highways maintenance.

Now it has been completed, joint owners Inception and Moorgarth can begin building the 422 apartments, which will be a mix of one, two and three bedroom properties.

The towers will also feature retail and office space.

The S106 bill for the developers will run into the millions. Although the total is not known yet, the developers will have to pay £1.092 million to the council for ‘improvements to the public realm’ and £633,000 to improve leisure facilities in Reading.

Plans for the redevelopment of the Bristol & West Arcade have been on the cards for years but have seen little action because the developers keep on changing their vision for it.

Developers won approval to transform the arcade into shops, offices and flats in July 2018.

But the plans have changed, with the developers going back to the drawing board.

More recently, a fresh application to transform the arcade into a 182 bed, eight-storey hotel was approved in July.

It will also feature a restaurant, and a new pub will replace the historic Coopers Arms pub facing Market Street.

The arcade itself has been sold at least twice in recent years, which may explain the plan changes.

Reading Golf Club has since relocated to Mapledurham, and wants to see its old course redeveloped.

A similar plan for 257 homes was rejected in July after the council received more than 3,000 objections, with the campaign group Keep Emmer Green opposing any development on the old golf course from the outset.

The developers have reduced the number of homes by 34, and are intending to build a mix of  detached, semi detached and terraced houses on the old course.

Another development which could decided on in 2022 is the scheme to build 620 homes with offices and retail space at the former Royal Mail depot in Caversham Road.

The plan, called Reading Metropolitan, has been in the pipeline for a while, with the developers Hermes first holding consultations on the scheme in November 2018.

Hermes is planning to build nine high rise buildings and 17 town houses, ranging in height from two to 24 storeys, providing a total of 620 homes.

The initial plan was to build 658 homes but the scheme was adjusted in July 2020, reducing the number of new builds and getting rid of all the affordable houses previously incorporated in the scheme.

A spokesman for Hermes said it hopes for the application to be determined in February 2022.