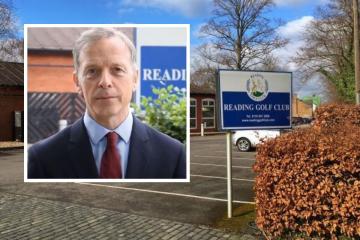 The MP has created a survey for residents to have their say on the proposals, which were announced in February.

The golf club, based in Kidmore End, has signed up developer Fairfax and housebuilder Redrow to deliver more than 200 family homes and provide a medical centre at the current golfing site, as well as turning acres of private land into public green space.

In a video posted on Facebook, Mr Rodda spoke to constituents, saying “Reading Golf Club is a beautiful piece of green land on the edge of our town.

“I am concerned about the impact on residents and local traffic.”

He attached a link to the survey where people can share their concerns about the plans, which saw a public exhibition take place earlier this year to get feedback from club members and the public.

At the time, Gary Stangoe, general manager of RGC, said: “We have had quite a lot of encouraging feedback but a lot of the community have concerns that they will want to be answered.”

Campaign group Keep Emmer Green said in a Facebook post in February that it is in “shock, anger and sadness” at the plans.

Neighbours also warned of the impact of hundreds of extra cars on narrow streets and said local infrastructure could not cope with the huge numbers of new residents.

Responding to Mr Rodda’s Facebook post this week, the Keep Emmer Green commented: “At the same time as telling locals that they will keep some of the land open, the Golf Club are attempting to get the very same land in to the South Oxfordshire local development plan.

“260 houses – unsustainable in itself in terms of additional load on local infrastructure – is just the first phase, and should be a massive concern to everyone north of the river.

“Please fill out Matt’s survey, and add your voice to KEG’s when the planning application opens for public comment.”