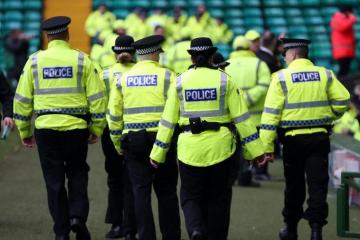 The UK’s football police chief said disorder was on the rise across the top five divisions before coronavirus restrictions forced more than 500 fixtures to be cancelled or played behind closed doors.

Public disorder was the most common reason – with two arrests for this offence.

This was followed by one arrest for alcohol offences, or driving under the influence of drugs.

Leeds was the club with the highest number of arrests across all divisions (52), followed by Birmingham (49) and Bolton (45).

He said: “What we can see is that prior to the restrictions from Covid-19, there was already an increase in the levels of disorder at fixtures.

“Significantly, the number of assaults against stadium staff and police officers are worryingly close to what we saw from a full season in 2018-19.”

Arrests linked to celebrations around matches played during lockdown are included in the figures, but DCC Roberts said that aside from a few high-profile incidents, such as Liverpool winning the Premier League, the vast majority of fans respected the rules and stayed away from grounds.

The figures also showed arrests for racist and indecent chanting across the top five divisions more than doubled last season compared to the campaign before.

The chair of anti-discrimination group Kick It Out, Sanjay Bhandari, said: “We need to mobilise everyone to stand against the rise in hate.

“Kick It Out will play its part with campaigning, education and talent programmes that diversify the face of football. But this is everyone’s responsibility.

No Reading supporters were arrested for racist and indecent chanting in 2019-20, nor in any of the previous five seasons.

A Home Office spokesperson said: “Hate crime has no place in football or anywhere else and we must all come together to confront it.

“The increase shown in these statistics is partly down to better recording and awareness, but we have no complacency in stamping out this evil from the game.

“We are bringing forward legislation to force social media companies to remove racist, homophobic and anti-Semitic abuse and we are working closer than ever before with the football authorities to bring perpetrators to justice.”

There were also four banning orders, which prevent an individual from attending all regulated UK matches, in place for Reading fans, as of August 2020.