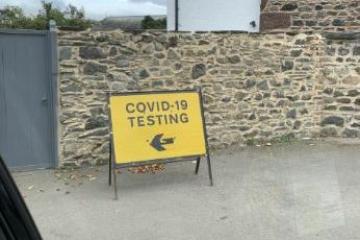 “KIDS shouldn’t be in school if testing isn’t ready”, said one Reading father who was forced to travel all the way to the Lake District for his young son to get a Covid-19 test.

Simon Tregidgo’s six-year-old son developed a continuous cough, so his parents kept him off school.

Simon said: “He always gets a cough in autumn and winter, but couldn’t be in school in case it was Covid.

“His three-year-old brother also then couldn’t be away and my wife and I, working from home, started to panic about two weeks isolation for the four of us when work was very busy.

“We started hunting for tests but the website was dreadful – it wouldn’t load, then did but wouldn’t load any options, then said no tests available.

“No home kits either.

“Given all the news about testing disaster we though this could get worse and the last thing we wanted was two weeks isolation when we hadn’t needed to.

“So we started trying postcodes slowly further and further away.”

The family couldn’t find any tests in neighbouring counties so began searching wider.

On Thursday, September 17, Simon was able to get a test – in Keswick, the Lake District.

The family took on the five-hour journey in order to get the test.

“The kids can’t be in school if testing isn’t ready.

“Every parent knows that kids get sick this time of year, and if we can’t know if it’s Covid there’s going to be so much disruption to schools and jobs by not knowing.

READ MORE: Reading Station crowned ‘Station of the Year’ – what do YOU think?

“We were lucky that my work would let me effectively take the day off at late notice, and that the £60 petrol and £20 fast food was affordable.

“Not many people will be as lucky.”

Simon’s is one of several stories across Reading of parents who have had to keep their child off school after they were unable to get a test.