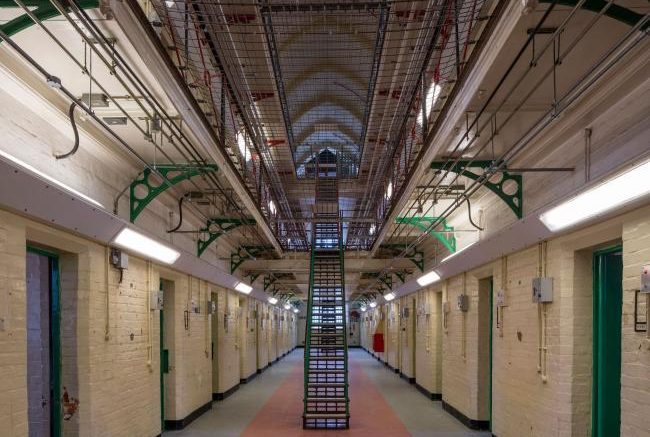 Reading Gaol, the former prison in the heart of Reading, is the talk of the town after an Oscar-Wilde focused possible Banksy artwork appeared at the site this morning.

But interest in the old jail has not suddenly appeared from nowhere like a forgotten cousin.

The future of the site has been a hot topic in recent years, with the sale of the prison falling through last year and a council-led bid to turn the Gaol into a theatre and arts centre in the works.

The Save Reading Gaol campaign for the site to become an arts and culture hub rather than instead of luxury flats has been running for more than 18 months years now, with support from celebrities such as Dame Judi Dench and  Stephen Fry.

Reading Gaol has been empty and unused since December 2013, when it was shut by the Ministry of Justice.

The Gaol, which writer Oscar Wilde was incarcerated in, was put up for sale in autumn 2019, with Reading Borough Council (RBC) submitting a bid to convert the site into a tourist attraction.

But the council failed in its bid, with developer Artisan Real Estate reportedly chosen to buy the old prison.

However, the sale fell through in November 2020 and, a month later, the council was granted a period of exclusivity by the MoJ to develop its own bid for the site.

The council is now exploring the possibility of submitting another bid for the prison site, in partnership with other private sector, voluntary and public organisations in Reading.

This period of exclusivity ends on March 15, but Reading East MP Matt Rodda has written to Robert Buckland, the Secretary of State for Justice asking for more time.

A row erupted between the council and a local theatre and arts group last month over the plans to bid for Reading Gaol.

Theatre & Arts Reading (TAR), which chose not to submit its own bid for the prison, released a document showing its blueprint for the former prison, following a summit on the future of the Ministry of Justice-owned site on February 12.

Melvin Benn, chairman of TAR, accused the council of ‘ignoring’ the document.

And now there is another twist in the tale, with the appearance of the Banksy-style grafitti on the prison’s wall potentially a game changer for the future of the site.

Responding to the news of the artwork, Melvin Benn, chairman of Theatre & Arts Reading, said: “It’s a great piece of art on the outside of the Gaol we are all observing. Is it a Banksy?

“Is the person climbing out as the art community is desperately trying to get in now?

“We hope the council is successful in their bid and realises the dreams of the arts and cultural groups in the town and gets them in legitimately.”

The Ministry of Justice (MoJ) has been approached for comment.

RBC declined to comment but tweeted: “What a surprise to wake up to this morning! What do you think? Is this the real deal?! #Banksy #ReadingGaol.”