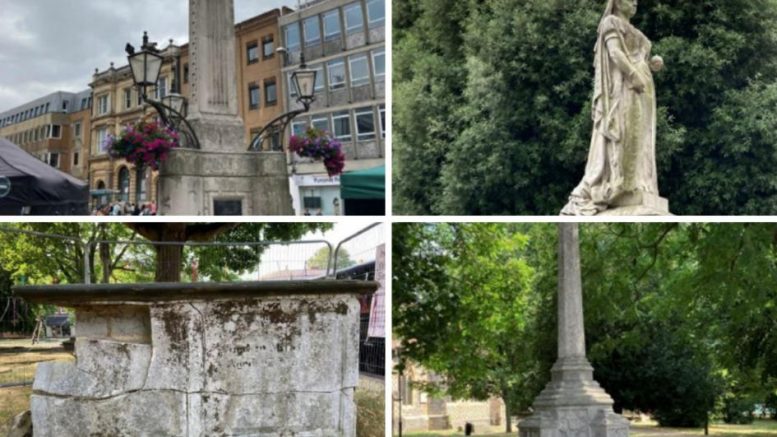 Four of Reading’s stand out public monuments will be restored to their former glory as part of a restoration project.

The council will conduct a restoration of the four monuments, which are the Zinzan Chest Tomb, the Simeon Monument, the Jubilee Cross and the Queen Victoria Statue.

The Zinzan tomb in particular is in a bad state, as part of the masonry of the tomb in St Mary’s Churchyard is missing, which has meant that it has had a barrier round it to prevent further damage and vandalism.

The tomb dates back to 1781 and was built for the ZinZan family of Reading.

Work to the tomb involves stone matching repairs to the white limestone,
dismantle the tomb and repairing with hard mortar and to reinstate it
with stonework repairs and sharpen the lettering of inscriptions.

The more together statues and monuments will be restored to past glory.

The Queen Victoria Statue at the end of Friar Street was sculpted by George Simmonds to commemorate the 50th year of that queen’s reign in 1887.

Those mourning the death of Her Majesty Queen Elizabeth II laid flowers at the statue in September this year.

The council will now clean it and fit replacement steel chains around the statue’s base.

The Jubilee Cross in St Mary’s Churchyard was also built in 1887 to mark the 50th year of Queen Victoria’s reign.

It also commemorates the  completion of the restoration of St. Mary’s Church.

Work to the cross involves restoring lead lettering to match the Medieval style of the cross and improvements to its inscriptions, and masonry installation and cleaning work.

Finally, the Simeon Monument was commissioned by Edward Simeon, the director of the Bank of England in 1804.

Its restoration entails cleaning, restoration of its limestone surface and details, and painting the metal railings around the obelisk.

Reading Borough Council’s project to restore the four monuments was approved unanimously by the planning committee on December 7.

Explaining the project, council planning officer Nathalie Weekes said: “The monuments have fallen into various states of disrepair and require works to restore them to their original condition.”

“For the town centre, people would really like to see it spiffed up.

“This is another way of doing this, and it’s fabulous.”

Cllr Rowland added that the project is part of Reading’s High Street Heritage Action Zone to revitalise the historic buildings in the town centre.

Meanwhile, cllr Simon Robinson (Conservative, Emmer Green) corrected the council’s planning department on the Jubilee Cross, which was built for Queen Victoria’s Gold Jubilee in the 50th year of her reign, rather than her diamond jubilee, which was celebrated 10 years later in 1897.

Permission for the project was needed as all four monuments are listed by Historic England.

You can view details of the project by typing reference 221520 into the council’s planning portal.