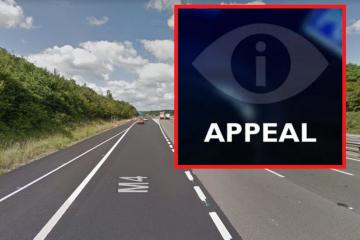 A 73-YEAR-OLD woman died at the scene of a serious crash on the M4 yesterday (July 17).

Police are now appealing for witnesses to the collision, which happened eastbound between junction 13 at Newbury and junction 12 at Reading at around 1.55pm.

The incident involved three vehicles: a white Astra van, a black Landrover Freelander and a white Audi A3.

The driver of the Landrover, a 73-year-old woman from Wales, died at the scene.

The passenger of the same vehicle, a 74-year-old man from Wales, was taken by air ambulance to hospital with serious injuries.

Their next of kin have been informed and are being supported by specially trained officers.

No one else was injured.

A 40-year-old man from West Sussex has been arrested on suspicion of causing death by careless driving and remains in police custody at this time.

Investigating officer, sergeant Darren Brown of the Roads Policing Unit based at Three Mile Cross, said: “Our thoughts at this time remain with the families of those affected by this collision.

READ MORE: Take a peek INSIDE five of the most expensive homes put up for sale in Reading recently

“An investigation has started and we would like to hear from anyone who has information which could help.

“If you saw this collision happen or think your dash-cam footage may have captured this incident, please get in touch.

“You can contact Thames Valley Police by calling the non-emergency number 101 or by making a report online, please use the reference number 43200219124”