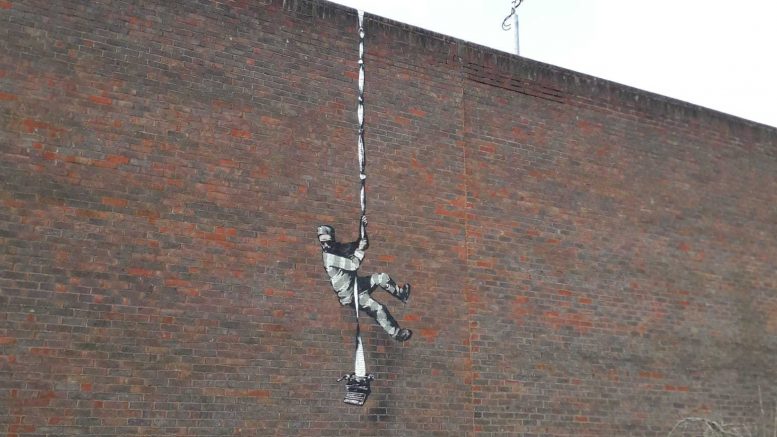 A bid for Reading Prison will be urgently discussed tonight by the council ahead of next week’s deadline.

Reading Borough Council (RBC) will discuss its bid for the site at tonight’s Policy committee, a last-minute urgent agenda item added to the bill.

The discussion will be in private for commercial reasons.

Reading Gaol, the former prison in the heart of Reading, is the talk of the town after a Banksy artwork appeared at on the prison walls last week.

The council said it is “thrilled Banksy appears to have shown his support for our desire to transform the vacant Reading Gaol into a beacon of arts, heritage and culture with this artwork”.

It says it is pushing the MoJ to make suitable arrangements to protect the image.

But the future of the Ministry of Justice-owned (MoJ) site is also a hot topic, with the sale of the prison falling through last year and a council-led bid to turn the Gaol into a theatre and arts centre in the works.

The council, in December 2020, was granted a period of exclusivity by the MoJ to develop its own bid for the site.

This period of exclusivity ends on Monday, March 15, but Reading East MP Matt Rodda has written to Robert Buckland, the Secretary of State for Justice asking for more time.

The Save Reading Gaol campaign for the site to become an arts and culture hub instead of luxury flats has been running for more than 18 months years now, with support from celebrities such as Dame Judi Dench and Stephen Fry.

Reading Gaol has been empty and unused since December 2013, when it was shut by the MOJ.

Whether the new Banksy artwork will affect the sale is not yet clear.

The MoJ says it is aware that Banksy has confirmed he is responsible for the graffiti which appeared outside Reading Prison.

It is “considering next steps and will provide an update in due course”.

A new cinema is set to open soon at Broad Street Mall, with a licence application submitted and photos showing the work underway to get the cinema ready. Reading Chronicle | Town Centre …

OUR frontline workers are there to protect and help us but some are still subjected to attacks out on the job. Reading Chronicle | Town Centre …