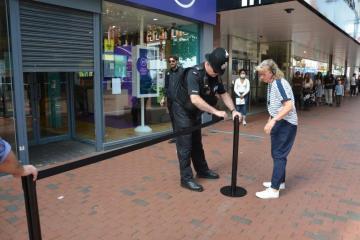 POLLS suggest that most people in Reading still won’t be using The Oracle or other non-essential shops due to fears that it isn’t safe to do so.

As the government relaxed lockdown guidelines, non-essential shops were able to open in England yesterday (June 15) for the first time since March.

READ MORE: ‘A free for all’: What YOU had to say about shops reopening

The Oracle and shops in the town reopened their doors to customers with strict social distancing and hygiene rules in place, but a poll on The Chronicle website shows that most readers are still too concerned about the pandemic to go shopping.

READ MORE: FULL list of reopened shops in The Oracle

Another 21 per cent clicked ‘No, but I will be going at some point this week’, while 4 per cent said ‘yes’ and 3 per cent said they would be venturing into town, but they feel nervous.

Another poll question put to readers yesterday was to those who had ventured into the shops, asking ‘are people sticking to social distancing guidelines in the town?’

Amongst certain readers at least, it would seem residents are not yet willing to be amongst larger crowds or small areas just yet.

Latest figures for the area show that the Covid-19 death toll remains in the hundreds, with 182 deaths confirmed at the Royal Berkshire Hospital on Sunday, June 14 – the same number as Friday (June 12).

The victims were among 3,276 deaths recorded across the South East.

Of 25 trusts within the region, Royal Berkshire trust has the seventh highest death toll.