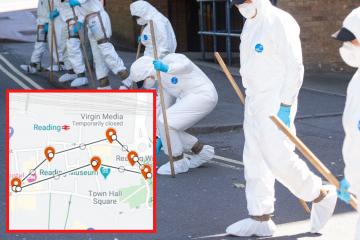 TEN days on from the shocking terror attack which rocked Reading, parts of the town are still closed off to the public.

Police remain stationed across the town as investigations into the killings of James Furlong, 26, Joe Ritchie-Bennett, 39 and David Wails, 49, continue.

Officials said last week that a high police presence can be expected by residents for some time.

Below, a map shows which parts of the town are taped off.

Thames Valley Police chief constable John Campbell gave details of what could be expected last week (June 21), where he said there was no wider risk to the public, nobody else is being sought in connection with the attack and that cordons would remain in place.

Addressing the public, he said: “Police cordons will continue to be in place and I understand that this may cause disruption to you, but this is so vital that the police investigation can continue and I know you will understand this.

“You will see an increase in police presence. If you have any concerns please do not hesitate to question them.”

Some pedestrian areas of the town centre are also closed off from the public. Forbury Gardens, the scene of the attack, remains cordoned off.

The man accused of the killings appeared in court yesterday, where it was revealed that he shouted “Allahu Akbar” as he stabbed people in the popular park on Saturday, June 20.

Khairi Saadallah, 25, is charged with murdering the three men with a large kitchen knife shortly before 7pm.

PARTS of the M4 will be closed this weekend to allow for resurfacing works to take place. Reading Chronicle…