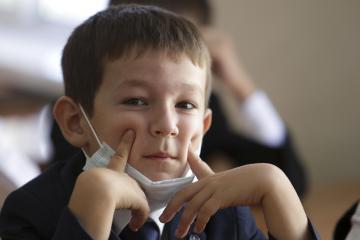 SCHOOLS across the country are set to reopen doors to pupils this week, after months of closure during lockdown.

Reading schools will be among those to see children back in the classroom in the coming days, with new measures in place implement Covid-19 safety.

The World Health Organisation now advise that “children aged 12 and over should wear a mask under the same conditions as adults, in particular when they cannot guarantee at least a 1-metre distance from others and there is widespread transmission in the area.”

Schools and colleges will have the discretion to require face coverings in indoor communal areas where social distancing cannot be safely managed, if they believe that it is right in their particular circumstances.

Education unions are calling for a temporary ban on school absence fines.

Approximately 40 per cent of schools are expected to welcome back students for the start of the autumn term today (September 1) despite concerns being raised about their ability to reopen safely.

It will be the first time many pupils in England have stepped into a classroom since March, when schools were closed except to look after vulnerable children and those of keyworkers.

The National Association of Head Teachers (NAHT) said the government should temporarily scrap fines for parents who do not send their children back to class due to fears around coronavirus.

NAHT general secretary Paul Whiteman said: “If you are a parent and you are worried about safety, a fine is unlikely to make you feel any safer.

“This would send a powerful signal to parents and families and could well mean that more of them are willing to bring their children back to school, which is what we all want to see.”

The school leaders’ union said while it hoped attendance would be “as close to 100 per cent as possible”, it understood “there will be some families who do not yet feel ready to return”.

Its recent survey of more than 4,000 school leaders in England and Wales found that 97 per cent plan to reopen their schools to all pupils at the start of the autumn term, with the date varying across the country.

The remaining 3 per cent, which were not immediately reopening, were planning transition periods for new pupils or phasing entry to alleviate students’ anxieties, according to the survey.

Meanwhile, more than a quarter (26 per cent) of parents said they were not planning to send their child back to school at the start of term, while a further 20 per cent remained undecided, according to a poll by the charity Parentkind.

Its survey of 3,400 parents also found that 78 per cent opposed fines for school absences during the autumn term.

The Department for Education (DfE) said fines for parents who refuse to send their children to England’s schools will only be used as a “last resort” when classes resume.

Local authorities can fine parents £120 – cut to £60 if paid within 21 days – over a child’s absence from school, with the threat of prosecution if they fail to pay.

Dr Mary Bousted, joint general secretary of the National Education Union (NEU) said fining families for school absences “will not resolve the fears or anxieties felt by many”.

She said the government also needed to improve facilities for remote learning and IT access for children to ensure their education continues with “as little interruption as possible” in the event of a future lockdown.

He said: “He needs to explain how he will make up for the damage already done, bring pupils up to speed and mitigate against the ongoing risk from the pandemic.”

Mr Williamson said in a statement: “I do not underestimate how challenging the last few months have been, but I do know how important it is for children to be back in school, not only for their education but for their development and wellbeing too.”

The teachers’ union NASUWT said there was still “considerable work” to be done around how the government intended to ensure schools followed its own safety guidance.

NASUWT general secretary Patrick Roach added: “The government has also failed to provide any guidance on schools on steps which should be taken to minimise any discriminatory impacts of coronavirus, despite the wealth of data showing that those from BAME (black, Asian and minority ethnic) backgrounds have a disproportionately higher risk of death or hospitalisation from Covid-19.”

He said the union’s latest research found that three in 10 teachers believed budgetary constraints will affect their schools’ ability to reopen safely.

It comes as a poll by Tes found that 86 per cent of nearly 6,000 school staff in England said minimising contact between pupils would not be possible.

More than a third (35%) also felt that the Government’s approach to coronavirus safety in schools would not work and left them “at risk”.

Schools in Scotland began to reopen on August 11, while all pupils in Northern Ireland were due to return from August 31.