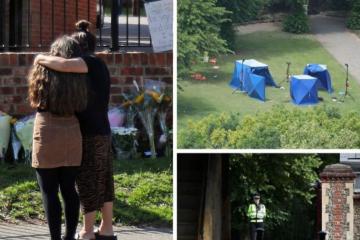 A MAN has described the chilling moment he bravely ran to help the three stabbed victims who died in Saturday’s terror attack.

Sandhurst School teacher Greg Wilton was having a picnic in Forbury Gardens, Reading when he saw a “commotion” happening.

He describes how he quickly “took off his shirt to stop the bleeding” on one of the victims who was stabbed.

The Bracknell man said: “We were having a picnic at the park with my wife Amy, Tom and his fiancée Amy and Randy. The Black Lives Matter demonstration started at 1pm and finished at 4pm and some more of our friends turned up.

“At about 7pm, the two Amy’s had gone to the Oracle toilets and then we saw a commotion happening.

WATCH: ‘No wider risk to the public’ TVP chief speaks about terror attack

“Tom and I ran over and saw three men unconscious. I took my shirt off to stem the bleeding and then one of the victims sort of stopped breathing so we put him in the recovery position.

“I used a canvas tote bag from the picnic and put pressure to his ear as there was a lot of blood coming from his head. His breathing became shallower too. “The adrenaline just took over and we just didn’t think about anything else. At this point, the two Amy’s returned and their first reaction was ‘where is Randy?’ as he was sat on the bench by the bandstand helping two other guys who were stabbed.”

Mr Milton explained how his friend Tom was helping one of the second victims and a member of public stopped to do CPR.

He added: “Within five minutes the ambulance came. We both feel shocked and it’s so surreal. My wife was quite upset and cried on the phone to her parents. We just feel upset we couldn’t do more.” His friend Randy was helping two other men who were sat on the benches by the bandstand.

The labourer from Reading said: “An Indian man was stabbed in the face and the other guy who was a personal trainer was stabbed in the back. I didn’t notice anything out of the ordinary before it all happened. I keep thinking to myself if I had known what was going on I could stop him but that’s not clever thinking. Part of me thinks it could have happened to us as were just 50 metres away from it. We were sat by the bandstand, but the rain started so we pegged it to sit under the tree – had we have stayed near those benches it could have been us.

“The park was full of people, seeing each other for the first time. I even recall saying to Greg ‘wow, this is the first time I am seeing you with my own eyes’.