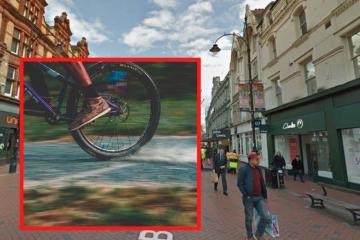 POLICE have begun a new campaign aiming to crackdown on cycling in the town centre.

The Reading Town Centre Neighbourhood Policing Team started the new scheme yesterday (July 22) to engage with people riding bicycles in Broad Street and remind them about using the permitted cycle routes as well as discourage the use of bikes on the non- permitted areas.

This has been welcomed by residents, with one saying he has witnessed “too many close encounters” between cyclists and pedestrians on the street.

Danny D’Arcy said: “I’ve witnessed so many close encounters as well as a few collisions with pedestrians and cyclists.

“Some of them whiz through Broad Street and some are also on their mobiles, with heads down!”

The town has specified cycle routes, with Broad Street off limits to bikes as a pedestrian-only zone.

Locals have complained though that some cyclists don’t take the non-bike zone rule seriously, instead choosing to remain on their bikes as they pass Broad Street, which is often busy with pedestrians.

Mr D’Arcy added: “I am pleased to see that the police are now stopping cyclists from travelling through Broad Street from the KFC end down to junction with Victoria Street.

“Hopefully it will put an end to those irresponsible fast cyclists.

“The ban should be extended all the way to coffee shop corner, which is still pedestrianised.

“I hope this will make cyclists think about about the dangers of cycling through pedestrianised areas – cycles and walkers are not a good mix, then you have children walking through as well!

“Some cyclists really are lazy – I’m a cyclist and it takes me two minutes to push my bike from one end of Broad Street to the other, I’m amazed at how many unthinking, uncaring cyclists whiz through there, and even more of them do so on their mobiles.”

The police campaign comes as the town is starting to see more shoppers back on the street as lockdown is gradually eased.