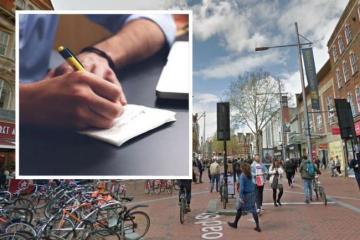 OFFICES around the country are starting to consider reopening after months of employees working from home amid the pandemic.

Some have already decided to remain closed for the foreseeable future, while others have started a gradual return, with safety measures introduced.

Locals from around Reading have given their opinions on how office work should resume – if at all.

RELATED: Should Reading offices be reopened?

In a poll presented to Chronicle readers asking ‘should offices in Reading reopen?’ a majority – 38 per cent – said: “yes, as long as safety measures are implemented”.

A further 15 per cent said: “Yes, the town needs people back” while 27 per cent clicked “No, it still isn’t safe enough”.

The remaining 20 per cent said: “No, it’s nice having the town quieter.”

Nationally, there has been an increase in people travelling to work in the last two months, with fewer working exclusively from home.

According to the latest data from the Office for National Statistics (ONS), 57 per cent of working adults reported that they had travelled to work – either exclusively or in combination with working from home – in the past seven days, while 20 per cent had worked solely from home.

Responding to the question in The Chronicle, local readers appeared divided over the the options.

Danny D’Arcy said: “No, it means a lot of stinky vehicles off the roads in mornings and evenings and less traffic jams.

“Like the song goes – something’s gotta give if we’re to move forward to a cleaner environment.”

Paul Collyer shared his experiences of work during lockdown, saying: “I am lucky that I work outside but I have been in contact in most cases directly with complete strangers and carrying their luggage etc.

“I have been working through most of the pandemic and I have not been ill neither have my colleagues.

“I am more worried about the flu season than Covid.”

Others presented the view that, as schools have now reopened, people should also be returning to offices.

Among these was Chloe Phillips, who said: “In my opinion if our young children can go to school, why can’t adults work in an office? Kids are harder to keep away from each other then adults”, while Nicola Herbert said: “Yes, if your sticking kids back into school, get your a***s back into an office!”

Some though have pointed out that working from home is beneficial in other respects, not just containing the spread of coronavirus.

Sue Taylor “Why [return to offices]? Why go back to commutes, traffic, office gossip and politics?

“My office never shut and I worked through.

“But can’t help thinking it’s constricting like school, and I never liked school.”

Hollie Jayne said: “Companies have spent a lot of money to ensure that people can work from home.

“They’re not going to stop using those assets.

“I think we have learned that some people work better at home, some in the office environment and some a mixture. !I do a mixture and have a good balance I think.

“I don’t think we will ever go back to ‘normal’, I think there will be a new normal, it will be interesting to see if sickness has gone down since the pandemic.

“As long as productivity is the same, I don’t understand presenteeism at all, what’s the point of making someone go to the office for the sake of it, if they can do their job at home?”

Carol Thomas believes offices should open for the sake of the economy.

She said: “Yes definitely [officers should reopen] or else we really will be in a deep recession.