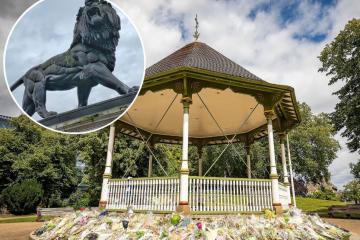 READING’S iconic Maiwand Lion that has become a symbol of hope for the town will now shine bright as Forbury Gardens reopens.

The park has been closed for some 20 days since the horrific attack unfolded in which three friends lost their lives.

Forbury Gardens has reopened today for the first time since the attack and Reading Borough Council has announced in will be lighting up the lion statue in memory of the victims.

ALSO READ: John Lewis confirms it WILL reopen Reading store but closes others nearby

James Furlong, Joe Ritchie-Bennett and David Wails were killed when a knifeman rampaged through the park on June 20.

It happened shortly before 7pm and three others were seriously injured.

The park until now has been closed to allow police and forensic teams to investigate and as such floral tributes were left nearby.

RBC has confirmed that all the flowers laid in tribute to the Forbury three have been moved to surround the park’s bandstand.

The structure is engulfed in colourful tributes, which also include those from the Holt School where Mr Furlong taught.

Reading Borough Council leader Jason Brock said: “It is now nearly three weeks since the horrific events at Forbury Gardens, which nobody in Reading will ever forget.

“As always, our thoughts remain firmly with the families of James, Joe and David.

“Now that the Gardens have re-opened, we fully appreciate that people will want to visit in their own time and for a period of quiet reflection.

“Everybody is, of course, more than welcome to do that and see flowers that have been laid to pay tribute to the victims, or to lay a tribute themselves.”

The leader continued to explain how the fondly known Forbury Lion became a symbol of Reading’s response in the aftermath of the attack and it will be lit up to ‘mark that magnificent and dignified response’.

Lights will also shine bright across the bandstand and tributes in an act of ‘remembrance and hope’.

The council is working with local company Yes Events to light the structures for two hours each night. From tonight they will shine bright from 9pm to 11pm and will be in place temporarily for two weeks at no cost to the council.

Reading Borough Council has also confirmed it is working with the families of the victims to create a permanent memorial.

For more details or support go to the dedicated website created by the council: http://together.reading.gov.uk