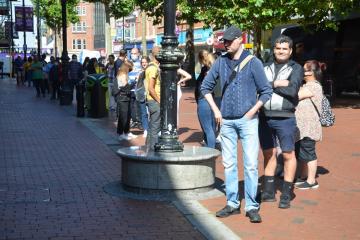 WITH today (June 15) marking the first day of The Oracle reopening since lockdown was implemented in March, keen shoppers were quick to visit the town.

Clear social distancing guidelines have been put in place, but some visitors don’t believe residents are following the rules closely enough, with one describing the new one-way system as “a free for all.”

In a poll on The Chronicle’s website asking people who have been in the town what they thought, 22 per cent said there was ‘no social distancing’ being adhered to, while 78 per cent said some are following rules but others aren’t.

Stephen Graham tweeted a photo of the new one-way system put in place in the town, saying it was “pretty much a free for all once you pass the signs.”

Also taking to Twitter, Michael Todd said: “[I’ve] been today it’s like a theme park with long queues into shops.”

Pictures show a busy town centre, with the majority of people seeming to be following guidelines.