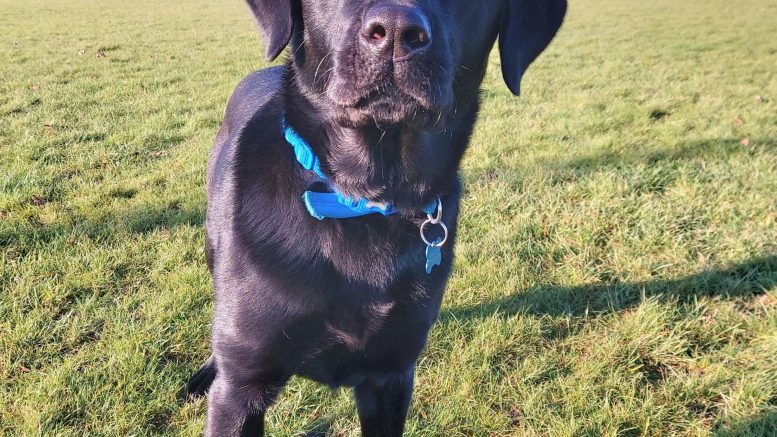 A REBELLIOUS guide dog that had to retire early is now loving life as a pampered pet after being rehomed.

Victoria, a four-year-old black Labrador, worked for two years to support Frankie Tipton, who works as a diversity and inclusion co-ordinator at Thames Water.

READ MORE: The five PRICIEST streets in Reading – and how much the houses cost

She would accompany Mr Tipton to the firm’s headquarters in Reading, but would often wander off and eat food from bags under desks or stop dead in the middle of the street for no reason.

On one occasion, she almost made Mr Tipton step off a railway platform after being distracted by another dog.

Guide Dogs attempted to retrain Victoria and improve her behaviour but she eventually had to retire as she was not enjoying working life.

She has now been adopted by Kirsty Halford, who works as a nature reserves manager at Thames Water, and her family in Didcot, Oxfordshire – where Mr Tipton and his family also live.

Mrs Halford had already walked Victoria on a number of occasions and agreed to adopt her “in a heartbeat” after Mr Tipton asked if she would consider it.

“She loves the fact she doesn’t have to be walked on the lead everywhere she goes, and absolutely loves playing catch with her ball when we go out for long family walks,” she said.

“Guide Dogs worked with Frankie and Victoria to try and retrain her and look at her behaviours, but it wasn’t meant to be.

“It is sad, but she wasn’t enjoying being a working dog – she just wanted to be a family pet.

“It was better for his sake, and hers, that she retired early, and we’re so happy to be able to give her the life she wanted.”

Mr Tipton, who is registered blind, hopes to be reunited with Victoria over Christmas but is keen to give her time to settle into her new home.

He described Victoria as a “lovely soul” but said she had never settled as a working dog.

“At first she was great, but she had too much free will, and would often just stop in the middle of the street – which wasn’t ideal,” Mr Tipton said.

“I’m on the waiting list for another guide dog but can still get around with my white cane.

“I do miss Victoria as a family dog. I’m just so happy my friend and colleague Kirsty and her family have been able to take her on. I know all their lives will be so much happier as a result.”

A spokesman for Guide Dogs said: “We are incredibly fortunate to have so many people offering fantastic new homes for our withdrawn and retired guide dogs.

“We rehome our dogs for a variety of different reasons, and their new owners always leave with advice to help settle in their new dog.”