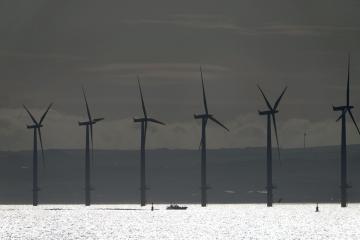 TENS of thousands of megawatts per hour of renewable energy were produced in Reading last year, figures show, as the Prime Minister pledges a green industrial revolution across the UK.

PM Boris Johnson said the coronavirus crisis should be used as a catalyst to make the UK the world leader in offshore wind power generation, creating thousands of jobs in the process.

But with the plans focusing largely on offshore wind farms, the Solar Trade Association said solar energy has a significant role to play, and was “noticeably absent” from the speech.

Figures from the Department for Business, Energy and Industrial Strategy show 25,656 megawatts per hour (around 26 gigawatts) of renewable electricity were generated in Reading in 2019.

This was 9 per cent more energy than the 23 GWh produced in 2014, the earliest year of data available.

The biggest producer of energy in Reading last year was landfill gas, which is created by the decomposition of organic materials in a landfill, which generated 16,794 MWh – 65 per cent of the total.

This was followed by solar power (22 per cent), and sewage gas, which is created by combining sewage with bacteria – which generated a further 3,266MWh (13 per cent).

Renewable electricity generated around a third of the UK’s total energy last year (120,675 GWh) – almost double the amount it did in 2014.

Offshore wind farms, which are turbines located at sea, and onshore wind farms, based on land, were each responsible for 27 per cent of the UK’s total, but the government’s plan focuses largely on those in the water.

Downing Street said the £160 million investment programme will enable the sector to support up to 60,000 jobs by 2030, upping the target for offshore wind from 30 to 40 gigawatts.

Speaking at the Conservative Party Conference, Mr Johnson said: “Your kettle, your washing machine, your cooker, your heating, your plug-in electric vehicle – the whole lot of them will get their juice cleanly and without guilt from the breezes that blow around these islands.

“As Saudi Arabia is to oil, the UK is to wind – a place of almost limitless resource, but in the case of wind without the carbon emissions and without the damage to the environment.”

Behind wind farms (54 per cent) and plant biomass facilities (21 per cent), solar panels were the fourth biggest generator of renewable energy in the UK last year – with 11 per cent.

Photovoltaic technology, as its known, also has great support from the public, with the government’s own polls showing 86 per cent of people support solar – the most popular form of renewable energy.

Chris Hewett, chief executive of the Solar Trade Association, said: “It is encouraging that the Prime Minister is embracing renewables, but this must not be limited to large bits of kit.

“Solar energy was noticeably absent from yesterday’s speech, when it has a significant role to play in supporting a green recovery and shifting the UK towards a low-carbon economy.

“Today, solar technologies power more than a million homes and are vital in delivering flexible, affordable electricity and thousands of quality jobs across the country.”