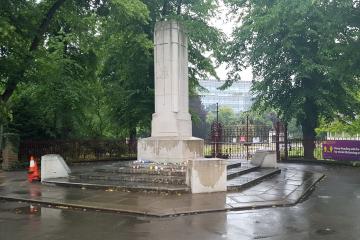 A CANDLE light vigil was held in the town centre yesterday evening, following the death of three residents in the Forbury Gardens terror attack last month.

The vigil was held at 7pm yesterday evening following the terror attack in Forbury Gardens, Reading, leading to the death of James Furlong, Joe Ritchie-Bennett and David Wails on Saturday, June 20, as well as three others injured in the attack.

ALSO READ: In My View: Reading East MP talks about “pulling together at this difficult time”

Candle lights and flowers were placed in memoriam by the public, and a minutes silence was held during the vigil to commemorate those who had died, followed by a round of applause for the emergency services workers who attended the scene at the time.

Bernadette Martin, who organised the vigil, said: “I knew Joe as I worked with his parter Ian for many years.

“What happened in the park two weeks ago has shifted everyone’s view of Reading.

“Things like that didn’t happen in Reading or even to people we knew, worked with or loved, it’s something that happened in big cities.

“I want to pass on my sincere condolences to the families of James, Joe and David, I cannot imagine how they are feeling.”

All tributes and messages for the three men have been moved to the Abbey Gateway, with plans to have them moved to the Gardens when it is reopened.

All the tributes will then be collated later on and held in the Berkshire Records Office.

The event was also live streamed on Facebook by Reading Pride for those who couldn’t attend.