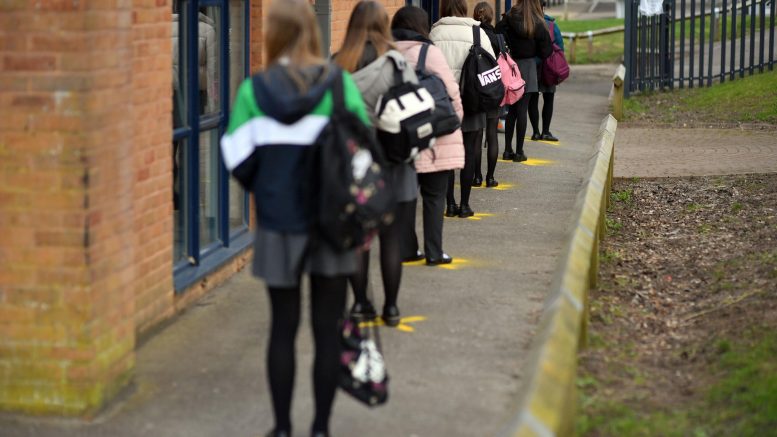 READING pupils missed tens of thousands of days of face-to-face teaching in the autumn term after having to self-isolate or shield due to Covid-19, figures reveal.

Schools across England reopened to all year groups from September, with students sent home in bubbles to self-isolate when coronavirus cases were detected.

Pupils across Reading missed the equivalent of 73,927 days of in-person education between September and December for this reason, Department for Education figures show.

That was an absence rate of 5.7%, and equivalent to roughly four days per pupil.

The figures include state-funded primary, secondary and special schools in the area.

Schools recorded general absence – including when authorised and unauthorised – separately, although this could include a child being ill due to having Covid-19.

The absence rate in Reading for the autumn term was around 4.6%, which was similar to 4.7% the previous year.

Across England, the overall absence rate for the autumn term was 4.7% – broadly in line with 4.9% a year earlier.

But a further 7% of in-person teaching was missed because of self-isolation or shielding due to Covid-19 – amounting to 33 million days, or five days per pupil.

Geoff Barton, general secretary of the Association of School and College Leaders, said the figures show the autumn term was “an extremely turbulent period” for pupils.

“This difficult situation was compounded by significant problems early in the term, obtaining Covid tests for pupils and staff and in obtaining public health support in handling positive cases,” he said.

“The Government’s refusal to give schools any flexibility to finish in-school teaching early before Christmas, which was accompanied by threats of legal action, made matters even worse.”

Schools were “badly let down” by government leadership during the autumn term, Mr Barton added, including by the “painfully slow” rollout of laptops for disadvantaged children that made remote education harder.

The rate of unauthorised absence in Reading’s schools was 1.6% during the autumn term, which was similar to 1.5% in 2019.

The rate of authorised absence due to sickness, which could include illness due to positive coronavirus cases, was 2.3% – compared to 2.5% the previous year.

Nationally, the illness rate dropped very slightly, which the DfE suggested could be down to falling cases of flu and similar illnesses brought about by Covid-related restrictions.

The school leaders’ union NAHT said there was now growing concern about the spread of the Indian variant in schools, with more reports of classes or bubbles having to close.

Paul Whiteman, general secretary of NAHT, said: “It is important that the Government gets on top of this quickly, particularly in those worst affected areas.”

A Department for Education spokesman said schools went to great lengths over the autumn term to become Covid-secure.

He added: “Where students did have to self-isolate, schools provided high-quality remote education, supported by an unparalleled government rollout of laptops and tablets for eligible children.

“It is positive to see underlying absence slightly decreased compared with previous years, reflecting schools’ efforts to keep their students engaged throughout an incredibly challenging year.”