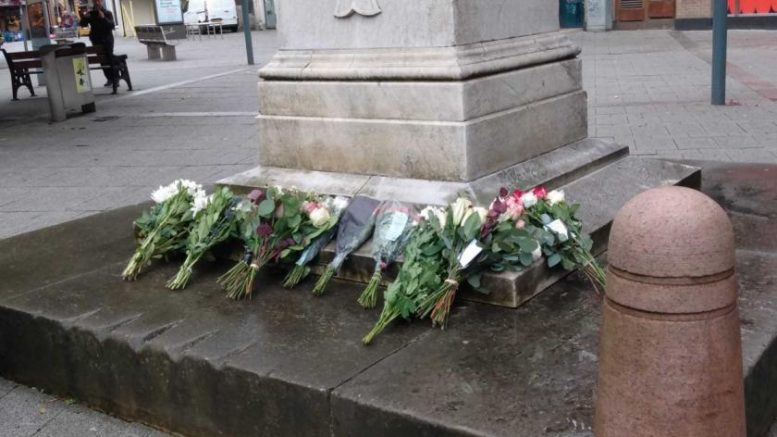 The people of Reading have laid flowers and written tributes to mourn the passing of Her Majesty Queen Elizabeth II.

Public commemorations began with councillors leaving flowers at the statue of Queen Victoria at the Town Hall Square at 10am.

Councillor Rachel Eden (Labour, Whitley), the mayor of Reading, said: “I actually did meet the Queen before I was mayor a number of years ago when she came to open the building I worked in at the time.

“As you would expect she was gracious, kind, warm, the things that everybody says about her.

“She touched so many lives and I’m sure everyone in Reading is feeling a sense of shock, sadness but also gratitude to her when we look back at her lifetime.”

Cllr Adele Barnet-Ward (Labour, Thames) remarked that it was a sad occurrence and one people were no longer used to, as opposed to people living in the early 20th century who saw the monarch change five times between Queen Victoria’s death in 1901 and Queen Elizabeth II ascending to the throne in 1952.

Nicola Dominic, who paid tribute in Readin town centre, said: “I’ve always known her throughout my life and I’ve seen her a couple of times.

“I think she’s wonderful, she’s never done anything wrong in her life, she’s brought up a family and I think she’s marvellous.

“It’s just marvellous what she’s done, and I just hope King Charles (III) can follow in her footsteps.

“I saw her when she was opening Reading Station, and then the second time she came down the escalators. There were all these soldiers down below, and we were all crowded round and she came round to everybody and I could see her.

Mrs Tam and her husband came to the statue to pay their respects.

The couple from Hong Kong moved to Reading eight months ago.

Mrs Tam said: “When we were born Queen Elizabeth was our queen, we learnt english from kindergarten, it was a very Western style education.

“Queen Elizabeth is a really good [role model] for us. On TV I remember when shows finished there would be her photo and the national anthem.

“We feel British, so now I feel she is our Queen.”

Lee Cheng Lo and his wife came to lay flowers at the statue.

Mr Lo, who is also from Hong Kong, said: “Maybe for some in the UK it’s just another day, nothing changed, but for us, after 1997 it’s changed a lot.

“The situation is much much worse. When we heard the news yesterday evening we felt really sad and my wife wanted to express her grief today.”

They have lived in the UK just over a year.

At 12pm, bells throughout the nation rung in Queen Elizabeth II’s memory.

Around the town centre, all digital advertising showed a picture of Her Majesty with the years 1926-2022.

Barclays, Parker and Romans estate agents all put tributes into their windows.

It is understood the ‘Proclamation of Accession’, a series of meetings that will officiate Charles III as King, will take place tomorrow Saturday, September 10.