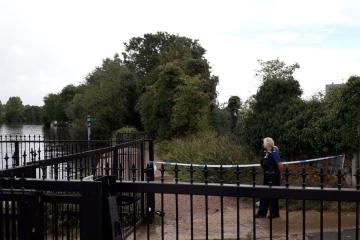 A WOMAN is in hospital after being stabbed near the River Thames in Reading.

Thames Valley Police said the woman in her forties was attacked in Scours Lane, Reading, about 11pm on Sunday.

A 57-year-old man, from Reading, has been arrested on suspicion of attempted murder.

He remains in police custody.

Police said the woman was taken to hospital with serious injuries where she remains.

Officers currently have a scene watch in place at the end of Scours Lane heading along the Thames Path.

Forensics have been spotted at the scene and officers appear to be searching a nearby boat.

Investigating officer, Detective Inspector Guy Elkins, said: “I am appealing for witnesses to this incident to come forward and assist us with this investigation.

“I would like to appeal to residents in Scours Lane and near to this area to come forward if they have any information that could assist with our enquiries.

“I would like to reassure the community that this incident is believed to be isolated, and that there is no wider threat to the public.

“The investigation is in the early stages however an arrest has been made in connection with this incident.

“Anyone with information is asked to call Thames Valley Police on 101, quoting reference number 43200255635.

“You can also make reports online, or remain anonymous by calling Crimestoppers on 0800 555 111.”