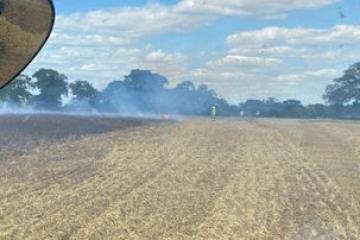 The blaze has since been brought under control by Royal Berkshire Fire and Rescue Service (RBFRS).

The fire broke out at around 1.28pm, and consisted of 40 acres of standing crop in Church Road, Swallowfield.

The service said that residents will have seen “a lot of smoke” but that the fire has now been brought under control.

Six crews and two 4×4 vehicles were sent to a large fire consisting of 40 acres of standing crop in Swallowfield – residents nearby may have seen a lot of smoke, but thanks to the hard work and efficiency of the crews, it was brought under control in an hour #OneTeamForBerkshire pic.twitter.com/qt6JFOaEhV

READ MORE: The BEST local places for a dog walk

Posting on social media, the organisation shared pictures of the scene at Swallowfield, where smoke can be seen rising from the ground as a fire truck approaches.

Crews were at the scene for approximately an hour and 35 minutes.

A spokeswoman from RBFRS said: “We would like to remind all residents to take care while out and about.

“If you do spot a fire in the open, get to a safe place and call 999 immediately.”