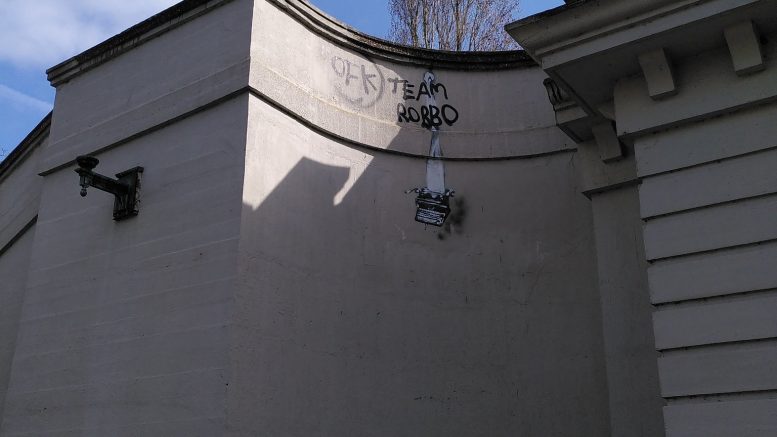 ‘Team Robbo’ has again been scrawled across the latest Banksy-style artwork that has appeared in Reading.

The tag has appeared just days after the artwork – the same typewriter image of the Reading Gaol work of Banksy – was spotted on Reading Bridge.

It comes as the latest in the Banksy saga that began when artwork depicting a prisoner escaping the prison appeared on an outside wall of the gaol on March 1.

Excitement swept through the town for the day following before elusive street artist Banksy confirmed the work to be his own on March 4.

However, the image was soon defaced with the words ‘Team Robbo’ sprayed across the image, with red paint covering the typewriter image.

According to The Guardian, King Robbo was a British graffiti artist who had a long-running dispute with Banksy. He died in 2014.

Since, a further image similar to that of the rope and typewriter of Banksy’s on Reading Gaol had appeared at another site in Reading on the side of Reading Bridge.

Images flooded the internet of the new artwork on March 18, with many questioning if it was a Banksy, a copycat, a practice run, or a response to the defacing of the original artwork.

It is not clear if the second image was created by Banksy but it has today also been defaced in the same way that the prison image was tagged by ‘Team Robbo’.

The tag has this time been scrawled across the rope of the artwork.

Stewart Marti-Haugh tweeted a picture of the latest tag, he said: “Not content with ruining the main piece on Reading Gaol, “Team Robbo” have now vandalised the typewriter on the bridge.”