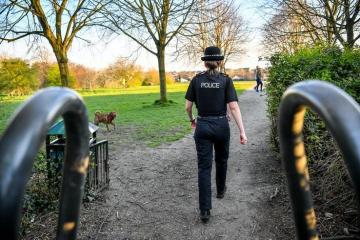 Thames Valley police have issued three fines to people for failing to self-isolate after arriving from a country on the quarantine list, new figures show.

But with just a few dozen punishments handed out across England, the chair of the National Police Chiefs’ Council said that stretched forces would not get into a “manhunt scenario” to find those not obeying the rules.

Travellers returning from abroad must self-isolate for two weeks, unless their destination is exempt under the travel corridor list.

ALSO READ: In the Dock: The following cases appeared at Reading Magistrates’ Court

Data published by the NPCC shows three fines were recorded by Thames Valley Police between March 27 and September 21 for people failing to do so.

The area’s police force was one of just 14 across England and Wales to issue fines, with 38 dished out in total.

But the NPCC figures showed hundreds of travellers suspected of breaking quarantine rules across England had not been traced.

Up to September 22, 4,114 cases were referred to police by health authorities.

Of these, 240 people were found not to live at the address they had given, and in 440 cases there was no answer when officers attended an address.

The vast majority (3,216 cases) were found to be complying with self-isolation rules, but 218 were in breach and were spoken to by officers to encourage them to comply.

NPCC chairman Martin Hewitt admitted there is no “foolproof system” to stop people flouting the rules and that stretched forces would not get into a “manhunt scenario” to find people who are not following the rules.

He said: “We have to be reliant that most people will be responsible, will accept that personal responsibility and will be sensible, but equally, there also has to be a response that is proportionate.

“It also has to be something that’s within the capacity of the service to deliver against when we have all the other demands that we have.”

This means 756 fixed penalty notices have been issued in the area since the Coronavirus Regulations were introduced.

None of these were due to breaches of the “rule of six” lockdown regulations, which came into effect on September 14, although there may be a lag in reporting so the number could change when figures are updated.

ALSO READ: H&M, which has stores in Reading and Bracknell, plans to close 250 branches

Just 15 were handed out across England that week.

In total, 18,912 lockdown fines have been issued in England and Wales so far, though just 151 of these occurred in the five weeks to September 21.

Police forces can issue a £60 penalty, reduced to £30 if paid within two weeks, for breaches of the lockdown rules – but just half of the fines handed out in England and Wales so far have been paid.

Mr Hewitt added: “It is crucial that people do everything they can, including limiting social contact, to reduce the spread of coronavirus. The country is at a critical point, and personal choices will matter in the weeks and months to come.

“Thank you to the vast majority of the public for sticking to the rules and following the guidance in place to limit the spread of the virus.

“A small minority, however, are not following the rules, and are making decisions which put lives at risk – they should expect to have enforcement action taken against them.”

Thames Valley police have also not given out any fines to people for failing to wear a face covering on public transport or in shops, with 89 elsewhere in England and Wales.