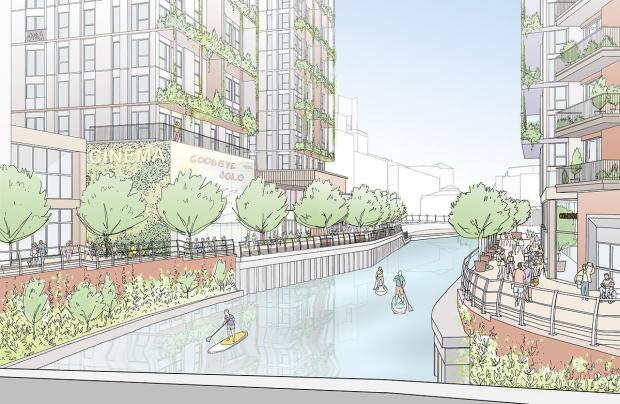 Part of The Oracle could be transformed into a new retail destination and a place for hundreds of people to live as fresh plans for the centre have been revealed.

Hammerson, the company which owns The Oracle shopping centre in Reading, has a launched a consultation on its plan to transform the eastern portion of the site into apartments, shared working space and public realm.

Its vision is to redevelop the former Debenhams and Vue Cinema to provide approximately 475 rental apartments, flexible co-working spaces and new leisure and entertainment facilities.

A website has been set up by planning agents Turley to gather public opinion on the proposal.

CGIs found on the website show new apartment towers and people enjoying themselves along the riverside.

A CGI of people enjoying themselves on the river at The Oracle for the east side development. Credit: Hammerson

The plan is in its embryonic stages – no application has been submitted to Reading Borough Council so far.

It could meet opposition as a development of approximately 475 homes at The Oracle does not feature in the Reading Local Plan which was adopted in 2019.

The Local Plan does refer to an extension of The Oracle between the River Kennet and Mill Lane for 1,600–2,000 square metres of new retail space, with use of a site at Letcombe Street for a public car park.

That is policy CR14g in the Local Plan, with the council asking that any development addresses the risk of flooding and site contamination, and enhance the conservation area.

However, there is no mention of homes or flexible office space envisioned for the site in the Local Plan.

The part of The Oracle which would be transformed as part of the east side redevelopment. Credit: Hammerson

Hammerson’s planning agents Turley are seeking views about the proposal on the website, which you can find here.

An in person drop in event will occur at The Oracle on Friday August 12, between 11am and 4pm in the former Crew unit (located on level 1 in Holybrook mall, directly opposite Hugo Boss).

There will also be a live webinar to provide further information on Tuesday, August 23, between 6pm and 7pm, which you can register for on the consultation website.

The former Debenhams unit was taken over by Next Beauty at Home in December 2020. It is unclear how long Next has a lease for the unit.

As for the cinema, the website states that the proposal would reconfigure the existing cinema to ensure it provides a high-quality film experience for customers.

Hammerson is one of the biggest shopping centre owners in the UK.

It also owns The Bull Ring in Birmingham and Cabot Circus in Bristol.