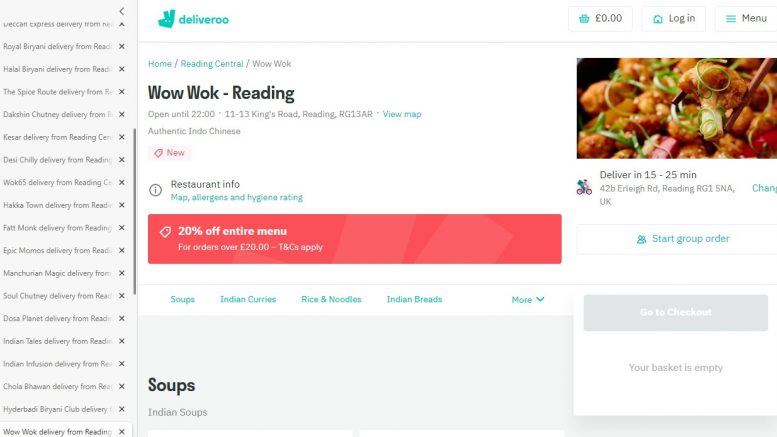 The Reading Chronicle has uncovered that a new restaurant in Reading launched under 40 different ‘virtual brands’ online – despite operating from one kitchen – a tactic Deliveroo claims helps to trial different cuisines and cuts food waste.

The approach has been slammed as “disingenuous at best” and “the illusion of choice”, but Deliveroo has backed the tactic, saying it is “not an attempt to flood the market in Reading”.

Madras Flavours, at 10-13 Kings Road, had more than 40 virtual brands listed last week on delivery websites, most with the same or very similar menus, but many of these have since been removed.

Uber Eats removed all 14 virtual brands after being contacted by the Chronicle, with just the restaurant’s own brand now on the website.

Deliveroo still has 29 restaurants at the address on the website as of this story being published, but only 16 are currently accepting orders.

You can see all the brand names at the bottom of the article.

What is going on?

PICTURED: Some of the different Deliveroo outlets

The virtual brands all come from Flavor Factory, a ‘ghost kitchen enabler’, providing brands, menus, recipes and training support for restaurants, offering them the opportunity to run multiple delivery-only virtual restaurant brands from one ‘dark kitchen’.

CEO Rahul Itaphe said: “When restaurants are struggling and not getting profitable, we help them by empowering them to first understand what is selling in the area and what kind of food or cuisine will sell most.”

He said initially there is a trial period to assess what cuisine will do well, which is why there were around 40 virtual brands at first at the Reading restaurant, and this is then reduced to “a handful of brands which aren’t selling the same stuff”.

The initial three-to-12 week “incubation period” is to understand the demographics of the area.

Mr Itaphe added: “People are aware of dark kitchens. It has been going on for two years. There is nothing dodgy about it.”

But he agreed it would be better if delivery websites highlighted when restaurants are virtual-only.

The plan for Madras Flavours is to reduce the number of virtual brands to five each on Deliveroo, Uber Eats and Just Eat, all with different menus, although the owners of Madras Flavours say they are just trying out the concept during the pandemic, with eat-in diners not allowed at the restaurant until May 17.

Deliveroo told us the number of restaurants is not an issue, but the duplication of menus is.

They said there has been a mistake on the part of ‘Flavor Factory’ meant most of the restaurants had the same menu.

Flavor Factory agreed to switch off any duplicated menus until they are changed over to being unique, although nine of the 16 menus which are currently taking orders start with the same dishes.

What is the benefit to Madras Flavours?

PICTURED: Some of the different available Deliveroo outlets for the same restaurant

Deliveroo supports the scheme, saying restaurants “can reach new customers through virtual brands without the costs and risk associated with starting an entirely new venture, which would traditionally entail the cost of setting up new premises on the high street.”.

It said virtual brands also cut food waste by enabling restaurants to use the same ingredients for different dishes on delivery-only menus.

The owners of Madras Flavors, who also own a restaurant with the same name in Hounslow, said: “We are trying it. Everyone is struggling. Hospitality is the biggest struggling department during Covid. They approached us. If we said no, they would go to a competitor.”

‘Better choice’ or ‘an illusion of choice’?

Taking a less positive view, local food blogger Edible Reading, who alerted us to the restaurant’s multiple personalities, said: “I really struggle to see any rational explanation why a business would have almost fifty different names across Deliveroo and Uber Eats, all trading from the same address and all offering virtually identical menus.

“Over half of the Indian restaurants in Reading on Deliveroo are a single business under a variety of assumed names.

“This is disingenuous at best: delivery apps should be all about giving customers choice, not the illusion of choice.”

A Deliveroo spokesman, responding to concerns about transparency and flooding the market, said: “In terms of transparency – one of the key benefits of virtual brands is that it allows our partners to test new ideas, menus and products independent of their original brand which leads to better choice for customers.

“It’s untrue to suggest that this is an attempt to flood the market in Reading.

“At Deliveroo we are proud to work with a wide selection and number of restaurant partners and ensure that we have the very best choice and selection for our valued customers.”

What about Uber Eats?

PICTURED: This photo was taken when all but three of the virtual brands had been removed

Uber Eats has now removed all of the virtual brands from its website since being contacted by the LDRS.

They have been replaced with Madras Flavours Pure Indian Vegetarian Restaurant (the actual name of the restaurant) only.

Taking a different stance to Deliveroo, an Uber Eats spokesman said: “Uber Eats takes this issue very seriously and we are currently investigating the matter.

“If we detect any suspected fraudulent activity, we will take necessary action, which may include removing a restaurant from our app.”

Here are all the restaurant brands on Deliveroo:

These are all the virtual brands that were on Uber Eats: