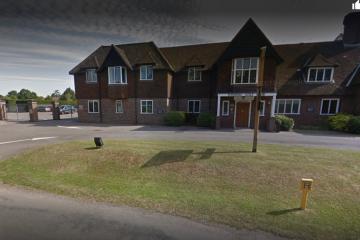 Thirteen houses could be built at Sonning Golf Club, with the plans set to be ruled on next week.

The plans at 0.8 hectares of land on the junction of Pound Lane and Duffield Road, Sonning, would include five affordable homes.

It has drawn criticism but a similar development was backed on appeal by a planning inspector, and so the principle for development of 13 homes on the site is established.

The application has been brought to the Wokingham Borough Council (WBC) Planning committee by Sonning and Warren ward councillor Michael Firmager, who said the development is out of character, overbearing and includes unsafe access onto Pound Lane.

He described the access onto Pound Lane as “extremely dangerous, being on a bend”.

There would be eight five-bed houses, two two-bed homes and three three-bed properties, with forty car parking spaces, if the plans are approved next week.

Sonning Parish Council have objected to the plans due to the size of the homes, the likely increase in traffic on a busy road and the loss of open green space.

It says the development would result in “significant erosion of the rural character of the area” and have a “major, adverse, urbanising impact”.

READ MORE: Controversial 150-space car park – this is why decision has been delayed

Sonning & Sonning Eye Society have also objected to the proposal. They say the previous application, approved on appeal by a government inspector, was for two storey homes, while the latest plan takes the homes up to 2.5 storeys.

Neighbour Paul Etherington said he “appreciates that following the inspector’s crazy decision the horse has somewhat bolted” but raised concern about three areas:

WBC’s Planning committee will vote on the proposal next Wednesday.

Council officers believe the plan provides adequate homes for occupiers, does not impact on neighbouring properties, meets design standards, and has an acceptable impact on the environment, traffic, highway safety and flood risk.

They say the proposal would deliver a high-quality residential development that would help Wokingham meet its five-year housing supply target.