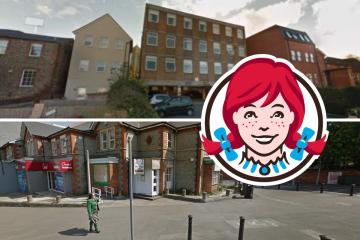 This week’s planning roundup of the most interesting decisions made in Reading includes rejected and approved extension plans, a two HMOs and two new fast food joints.

Wendy’s Reading return to the UK

Plans for Wendy’s to return to the UK have moved forward, with the council approving its latest request.

The US fast food giant will open its first UK restaurant since leaving the country 20 years ago in Reading.

Plans were approved on May 25 to transform the former Nationwide store at 1 Station Road into a fast food restaurant.

And the fast food giant has now been given permission to also convert the basement into restaurant/takeaway use.

The council previously granted permission for hours of 7am-11pm(Sunday –

Thursday) and 7am-midnight (Friday and Saturday).

Wendy’s has now been granted hours of 6:30am–midnight (Monday – Saturday) and 6.30am-11.30pm (Sunday) but will need to get permission from the licencing department to do so.

The building was locally listed in March 2020.

Conversion to flats at former offices and independent school refused

Plans to transfrom a building into four flats were refused this week.

The owner wanted to convert the building at 25 South Street, which was previously home to offices and then an independent school, into two two-bed flats and two one-bed flats.

The plans included three-storey extension at the back of the building.

A neighbour, commenting on the plans, said: “We are surrounded by building sites and constant noise including weekends.

“The constant works being done is slowly having a negative effect on my mental health”.

Council planners approved two-storey extensions at the back of a property in Tilehurst as well as a single-storey side extension despite concerns from neighbours.

Two neighbours objected to the plans on Oak Tree Road.

One couple said the two-storey rear extension would “massively impact” on the amount of natural light coming into their dining room.

They added: “It is already a dark room and cannot afford to lose any more

daylight. It would result in having to have a light on in that room all day.”

The extensions would also impact on what they can see from their dining room, they said.

“Currently we can see trees and sky, we would lose this and would be looking at a brick wall,” they added.

Similarly, the other neighbour said the plans would “completely destroy” the natural light in their kitchen.

Two neighbouring HMOs in east Reading will be expanded, with works to take place to create extra rooms.

Currently the two semi-detached houses on Bulmershe Road are able to accommodate a five-bed shared house and seven-bed HMO.

After the refurbishment and construction works, which the owner says will “modernise” the property, both HMOs will have seven en-suite rooms, with an identical layout.

A lower ground single-storey rear extension will be constructed to create more bedroom and communal living space and bin and cycle stores.

One neighbour had raised concerns about the proposal, saying: “While I fully appreciate that some HMOs are needed in the area, I am concerned about the rapid spread of HMOs and think that there needs to be a better balance between family houses and HMOs on Bulmershe Road.

rooms for occupants, that the general living space is not suitable for

an increase of occupancy.

“I am concerned that it will lead to constantly changing occupants which will not benefit our neighbourhood.”

But the council aproved the plans on Tuesday, September 22.

A new chicken and pizza shop will be coming to a street with “too many fast food shops” despite protests from neighbours.

The council has given a Dallas Chicken and Pizza franchise permission to convert the empty retail shop at 81 Whitley Street into a takeaway and restaurant.

Three men have been charged in connection with a stabbing in Reading. Reading Chronicle | Town Centre …

New plans have been submitted to build flats above a recently closed pornography and sex toy shop near the town centre. Reading Chronicle | Town Centre …

TWO men have been arrested following a stabbing which left a man in a serious condition on Thursday (January 14). Reading Chronicle | Town Centre …

POLICE have been given more stop and search powers in Reading after a man was stabbed this week. Reading Chronicle | Town Centre …

THE well-known doves on an Oxford Road bridge will soon be painted over.  Reading Chronicle | Town Centre …