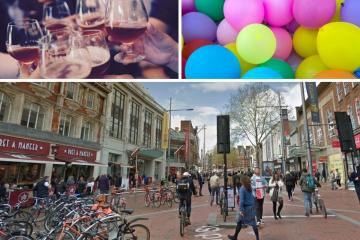 WITH thousands of weddings being postponed until 2021, stag and hen dos have had to suffer the same fate.

As Brits readjust and prepare for next year, foreign destinations for wedding celebrations seem less desirable due to the risk of travel restrictions being imposed at any given time.

As an alternative, many are seeking out locations in the UK instead – but Reading may be among the worst.

To assist Brits with their planning, OnBuy’s Party Department has assessed several key variables of hen do experiences in towns and cities across the UK, to determine which are the best and worst domestic locations.

The variables analysed for this research include the number of male strip clubs, cocktail bars, nightclubs, karaoke bars as well as the average price of an Airbnb, alcoholic drinks and taxis (per KM).

Worst locations in the UK for hen dos

Unfortunately, Reading has been placed joint fourth in the 10 worst places for hen dos in the UK, with a score of -10.

It has karaoke bars and no male strip clubs, but does have 11 cocktail bars and six nightclubs.

Gloucester holds the title of the worst location for hen dos, with a negative score of -240. Given its limited nightlife options, it’s easy to see why it is at the bottom of the pile.

Among the worst locations for hen dos is Wolverhampton (80 points).

Best locations in the UK for hen dos

OnBuy.com found that Liverpool is the best location in the UK to have a hen do.

The wealth of cocktail bars and nightclubs means it scores an impressive 720 points.

In second position is Birmingham, with a score of 710.

A huge selling point for Birmingham is the rich array of nightlife the city has to offer.

Glasgow is in third spot.

With a score of 650, the Scottish city has a good number of nightclubs/bars to enjoy. In addition to this, it also on average has the third cheapest Airbnb rates.

In seventh place is Leeds with a score of 440.

Rounding of the top 10 is Newcastle Upon Tyne, with a score of 390.

The vibrant city has the cheapest Airbnb prices in the list.