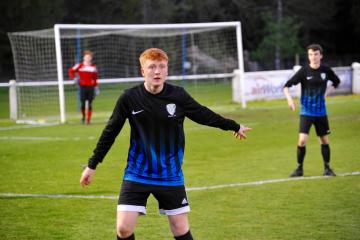 A STUDENT and footballer for Reading who fell five floors to his death while on a lads’ holiday in Spain had taken drugs and was “messing around” standing on furniture on a balcony when he slipped, an inquest has heard.

Football superstar Luke Freeman had just completed his first year at the University of Bournemouth when he jetted off to the Costa Brava resort of Lloret de Mar to celebrate with his friends.

After a drug-fuelled night out, the talented 19-year-old was hanging out with three friends on their hotel balcony just after 6am when he lost his balance, toppling over the edge and plummeting into the swimming pool below.

His heartbroken parents, Mark and Menna told an inquest in Reading: “We spoke with some of his understandably traumatised friends who said he was messing around standing on the furniture when he lost his footing, slipped and fell off the balcony.

“We believe it was a terrible and unfortunate accident.”

An expert from the National Institute of Toxicology in Barcelona confirmed that the sports science student had no alcohol in his system but drugs, including cocaine and MDMA, were detected.

Mrs Freeman told the coroner: “Luke loved life and had everything to live for.

“He had a summer of music planned and he was excited about returning to university.

“He loved life to the full and to the extreme, which sadly cost him his life.”

After seeing him plunge five storeys into the swimming pool, Luke’s friends rushed to his aid and pulled him from the water before emergency crews attempted to resuscitate him.

Despite the best efforts of paramedics, Luke was declared dead at 6.30am.

It was later confirmed by pathologist Josep Valbi that he had died from a traumatic brain injury.

Assistant Berkshire Coroner Alison McCormick said: “Luke Freeman was a 19-year-old university student who had a loving and supportive family who thought he was very special.

“In July 2019, Luke went on holiday to Spain with his friends.

“According to Spanish police, at 6.15am he fell from the balcony and landed in the swimming pool below. Although emergency services were quick, he had already passed away and was declared deceased at 6.30am.

“He died as a result of a traumatic brain injury. Toxicological reports of his blood and urine suggest there was no alcohol in his system but there was the presence of various drugs including cocaine and MDMA.

“The conclusion of the Spanish authorities was that it was an accident. This view is shared by Luke’s parents who spoke to his friends.

“I am satisfied there was no third party involvement and Luke did not jump with the intention to end his life.

“I find he fell and that it was an accident. The fact that he had taken a number of drugs increases risky behaviour and an accident occurring.

“On July 2 2019, Luke accidentally fell from a Trimar apartment balcony in Lloret de Mar and sustained a fatal head injury.”

A tribute from the Procision, which is based in Scours Lane, Reading, said: “Everyone at Procision Reading Academy was deeply saddened to hear of the death of former student Luke Freeman.

“Luke was an excellent student, intelligent, caring, polite, respectful and funny. He finished our programme with a triple distinction, won two leagues, and came on two tours with us (Barcelona and Sporting Lisbon).

“He had finished his first year at university where he was excelling again. Our thoughts are with his family and friends at this very difficult time.”

Social media was flooded with tributes to the young football star with one friend writing: “He was a super, super talented player. He was the sort of player you don’t get in English football, with an absolute magic wand of a left foot.”

The teenager was also a huge music fan, spending a lot of time with friends who headed to festivals and concerts around the country.

“It’s never nice to lose someone so young. We remember Luke being at our first-ever event at the front barrier for most of the night. May you rest easy. We send our deepest condolences to Luke’s family and friends at this hard time.”

Coroner Ms McCormick added: “I want to tell you how sorry I am that you lost Luke in such a tragic way when he should have been having a fun holiday with his friends. It makes for really sad reading.”

Mother Menna added: “Luke loved and was loved by everyone. The loss of Luke has broken many hearts, he will be missed by so many.”

The assistant coroner’s verdict yesterday (June 29) was that of a drug related death.