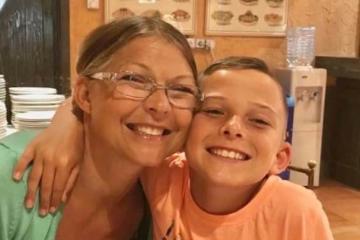 A MOTHER from Reading who received three life-saving organ transplants including one from her dad has paid an emotional thanks to those who saved her life.

Teresa Saunders has also spoken of the importance of people choosing to be organ donors.

When Teresa was pregnant with her son her existing kidney failure was “accelerated” and after giving birth she was put on the organ transplant list.

Whilst on the list, Teresa received two calls to say a potential match had been found but both fell through.

She revealed: “I was gutted, absolutely gutted.

“I didn’t know when my next call would be.

After three years of waiting, Teresa received the call she had been waiting for – the hospital had found a potential organ match.

Teresa said she “rushed to hospital” and underwent various blood tests which were sent off to be tested against the deceased donor to see if it was a correct match.

After 17 hours, the surgeon came in and gave Teresa the thumbs up and she was “wheeled down to theatre”.

She said she had “every emotion going” including panic and excitement.

In March 2013, Teresa had a kidney and pancreas transplant and spent two and a half weeks in hospital recovering much of which she says she cannot remember.

But this is not Teresa’s only experience of an organ transplant.

Years later a virus in her kidney had resulted in the health of the organ deteriorating.

Teresa explained she needed a living donor because it could be too long before a deceased donor that matched with her became available.

Her family were tested but nobody was a match.

Her dad, however, was a four out of six (six being the perfect match) and so he donated a kidney to his daughter in 2018.

READ ALSO: Reading businesses for sale as listed on Rightmove.

Teresa said it was “humbling” of her dad and explained “all you can say is thank you”.

She said: “I owe my life to my Dad because he has done that for me.”

England moved to an opt out organ donation system, bringing in Max and Keira’s law, on May 20, 2020.

Speaking of importance of organ donations, Teresa said: “Obviously when you die if you take your organs with you you could have saved seven to eight lives by just your organs.”

She continued: “To think what good your organs can do for someone else when you’re not here anymore.

“It’s just amazing what they do and how this can help people.”