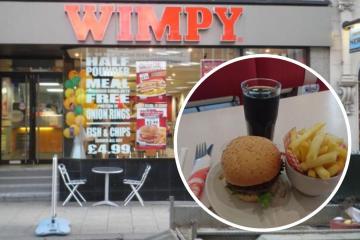 FOND memories are being shared over the news that burger chain Wimpy is making a return to Berkshire.

Last week it was officially announced that a Wimpy would be opening Bracknell for the first time in 30 years, and locals have been reminiscing about what the fast food outlet, which had its original peak in the 70s, meant to them.

There was once a restaurant in Oxford Road, Reading as well as Bracknell town centre, before stores began to close in the 1980s.

The chain had more than 500 locations in the UK during its peak, but just ten years later this number had fallen to 67, according to Vice.

But now it has been officially confirmed – Wimpy is coming to Bracknell, the first of the chain’s return to Berkshire since original stores closed.

Scott Cairo, from Reading, said: “A knickerbocker glory was the best thing in my entire world at the time,” while Tom Allum added: “I remember the one on the Oxford road in Reading, loved it!”

Reading residents seem keen to get a store opened in the town, with Shane Adams saying: “I want one back in Reading!”

“Used to get my fix at their Henley branch when they had closed down nearly everywhere else.”

In Bracknell, there seems to be a lot of excitement at the prospect of the classic restaurant opening back up in the high street.

Many have been tagging friends on the Facebook post announcing the news, arranging plans to check out the an updated version of one of their favourite childhood eateries.

While some shared significant memories of the place.

Claire Wicks said: “I was in the Wimpy bar in Bracknell when a couple of men came in crying and said John Lennon had been shot.”

It seems peoples’ love of Wimpy has not faded in the years of its absence from Berkshire, as it is set to once again become a staple of the high street.