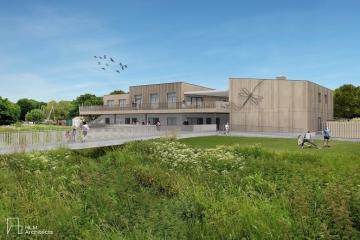 Ambitious plans to bulldoze Dinton Activity Centre and replace it with a brand new building have been given the all-clear by planning chiefs.

The transformation will include:

Conservative councillor Simon Weeks, chairman of WBC’s planning committee, said: “For those who have visited the existing centre this is a significant improvement.

“The existing buildings are well past their sell-by-date and the site looks tired and shabby.

“I think this is an opportunity to take this [site] forward.”

During the discussion of the planning meeting, Liberal Democrats councillor Andrew Mickleburgh asked why the new building would be rated ‘very good’ in a measure of the building’s sustainability when there are two higher levels of the ‘BREEAM’ standard.

An officer responded saying there was no planning obligation to achieve a higher status, and the ‘very good’ standard was a “reasonable” standard to adhere to.

Labour councillor Carl Doran added: “It is a flagship site for us with a countryside setting.

“With the climate emergency, I thought we would have been aspiring to something better.”

Despite these concerns, councillors unanimously approved the building designs at a meeting on Wednesday, August 12.

This means builders can now set about getting to work on the construction of the new activity centre, which was redesigned in February following a backlash from residents.

This came after complaints flooded in about the ‘hideous’ design of the original drawings, with some labelling the new activity centre a ‘concrete monstrosity.’

But the new designs got rid of the six red windcatchers which some said made the building “look like a factory” and were much more warmly received by residents.

One said: “I like the simplistic design as blends more into the surroundings than the previous design.”