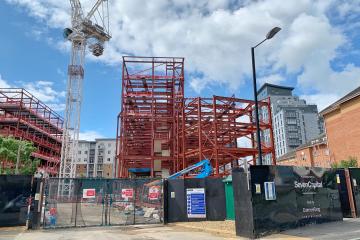 PLANS to radically reform the planning system in England “won’t end Nimbyism” and could lead to “extreme reductions” in funding for infrastructure in West Berkshire.

That’s according to West Berkshire Council planning experts who have raised a range of concerns about what has been described as “the most radical reform to our planning system since the Second World War”.

The government is running an eight-week public consultation (ends October 1) on a white paper, which contains controversial plans to streamline the planning process and make it easier for developers to gain planning permission in certain areas of the country.

There are plans split land in England into three categories – growth, renewal or protection areas – and provide automatic outline planning permission to all building projects in growth areas.

There are also proposals to introduce a formula that determines how many homes should be built in each area of the country and replace s106 contributions (developers contribute to improve infrastructure) with a nationally set rate called the Infrastructure Levy.

In a detailed response to the consultation, West Berkshire Council officers claim the one-size-fits-all Infrastructure Levy could lead to “extreme reductions in the amount of money available for infrastructure” in West Berkshire.

In their response, they wrote: “Schemes in the North of England would not be financially viable with such a charge whilst schemes in the South would result in being greatly subsidised by existing residents which would allow developers to make even greater profits.

“The proposed changes imply a threshold, therefore small developments which contribute greatly to financial provision of infrastructure in West Berkshire would not be captured.

“This will inevitably increase the burden on local residents.”

The West Berkshire planning officers also said the reforms will “remove the right of councils to determine individual planning applications” and allow the government to “impose” large numbers of homes on each area.

They claim the government’s plans would “reduce democratic oversight of planning decisions on some very major developments”.

“Removal of local democracy from this process will only serve to further erode public confidence in planning,” they wrote.

“This will lead to a further deterioration in confidence in the planning system, and will undermine any notion of changing public opposition to development.

“It will further erode public trust in the system and is likely to destroy what remains of local community identity. It won’t end Nimbyism.”

The officers claim the government’s radical reform “is simply not required” and long-standing issues with housing in England have been caused by “a market failure”.

The officers also say there is no need to grant automatic planning permission for developments as “getting consent is not a barrier” and 90 per cent of planning applications were approved last year.

In their response, they go on to describe plans to split land into three categories (growth, renewal or protection) as “extremely restrictive”.

The wrote: “Judging by the comments in the white paper, we anticipate that most of our area would be an area for protection.

“This would mean that the majority of the annual requirement would have to be squeezed in to the few urban areas.

“However, just because an area is protected does not mean that planning applications can’t be submitted.

“Developers, benefitting from automatic consents elsewhere, will be able to simply funnel their resources towards areas defined for protection, where there could be an increase of appeals.”

The council officers’ response to the public consultation has been sent to the government, after it was signed off at a full council meeting on September 10.