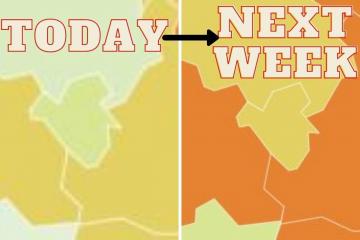 COVID-19 cases in Reading are predicted to rise in the coming weeks, but will remain lower than several Berkshire areas according to a ‘Covid calculator’.

A worrying trend in rising cases across the country, including in Berkshire, has been highlighted in the interactive map devised by Imperial College London.

The tool predicts which parts of the country have the greatest probability of seeing coronavirus cases rise above 50 per 100,000, which it classes as a ‘hotspot.’

Although Reading is not predicted to become a hotspot area in the near future, surrounding towns Wokingham and all of West Berkshire have been picked up as high-risk areas for their estimated increase in cases.

Currently, Reading sits in the ’15 – 25 per cent’ category in terms of chances of becoming a hotspot location.

West Berkshire and Wokingham are both set to become hotspots in this time, becoming 50 – 75 per cent locations by next week.

The map also shows the change of infection rates across the country, and identifies Reading as an ‘increasing’ area.

Very few areas in the country have been deemed as anything other than increasing.

The website uses data on daily reported cases and weekly reported deaths and mathematics modelling to reported a probability that a local authority will become a hotspot in the following week.

The predictions do assume no change in current interventions (lockdowns, school closures, and others) in a local authority beyond those already taken about a week before the end of observations.

READ MORE: The most and least deprived areas in Reading REVEALED

It comes as COVID cases continue to rise across the country.

As of Monday (October 5), Public Health England figures show that 1,016 people had been confirmed as testing positive for Covid-19 in Reading, up from 986 the same time on Friday.